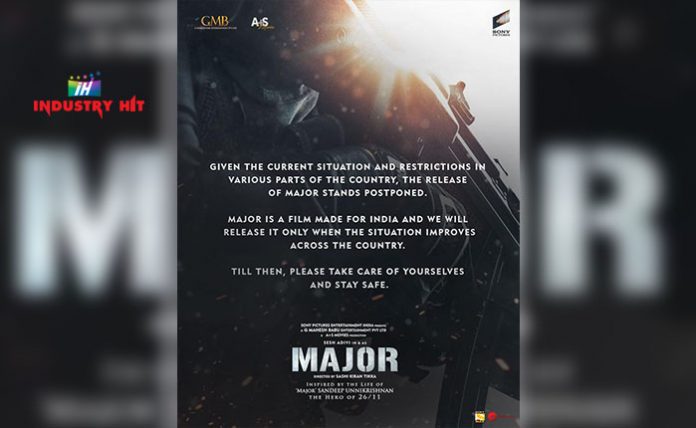 Actor Adivi Sesh’s first Pan India film Major which was scheduled for a theatrical release on February 11, has been postponed owing to the aggravation of the covid situation and curfew/limitations in most parts of the country. The makers have announced the news officially.

“Owing to the aggravation of the covid situation and curfew/limitations in most parts of the country, the release of Major stands postponed. We would announce a new release date soon. Please adhere to all covid protocols and stay safe. Our nation isn’t safe, till each one of us is safe,” reads the official statement.

Directed by Sashi Kiran Tikka, the film Major was shot simultaneously in Telugu, Hindi and it will also be released in Malayalam. The film’s musical promotions kick-started recently with the first single Hrudayama was unveiled recently. The song became a sensation. The visually stunning teaser shared earlier by the team struck a chord with the audience generating anticipation for the film. However, it stands postponed now.

Bringing to screen the untold story of Major Sandeep Unnikrishnan, the multilingual film ‘Major’ traces the journey of Major Sandeep from childhood, teenage, glorious years in the army to the tragic events of the Mumbai attack where he martyred, touching upon the different aspects of his being.