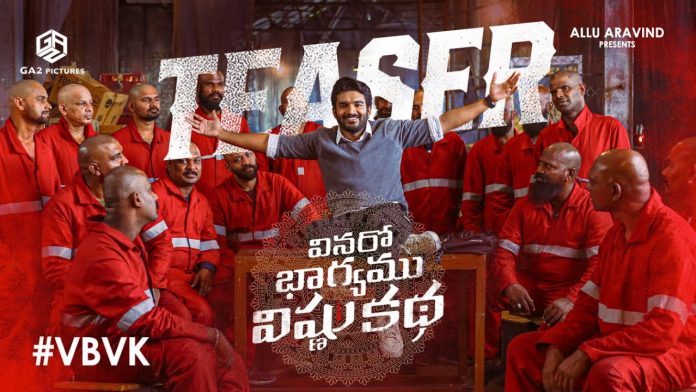 Young and promising hero Kiran Abbavaram who is attracting the youth with his new-age stories is increasing his market day by day. He bagged good craze among the public and is slowly earning the tag of a bankable actor. Now, he is working under GA2 Pictures banner for an interesting project titled ‘Vinaro Bhagyamu Vishnu Katha’. The hero’s name is Vishnu, the movie’s title ‘Vinaro Bhagyamu Vishnu Katha’ is completely justified.

Makers recently announced the release date with an intriguing poster. The film will be released in theatres worldwide on February 17th, 2023. Kickstaring the promotions today makers unveiled the teaser.

In the film, which has Tirupati’s temple town as its setting, Kiran Abbavaram plays the lead part. Vishnu, played by Kiran Abbavaram, introduces his tale in front of goons dressed in money heist costumes. The makers display the visuals associated with the story as the antagonist repeatedly queries what kind of story it is.

Witness the neighbouring concept with #VinaroBhagyamuVishnuKatha 🤩

Kiran Abbavaram says, “Love stories are the new comedies these days,” it starts out as a love story before becoming a comedy. The comic timing of Murali Sharma and Kiran Abbavaram is impressive. It starts as concept based movie with the mix of love and comedy then turns into suspense thriller.

In the teaser, creators introduced a number of themes that the audience found confusing before Kiran Abbavaram clarified it at the end saying that it’s a intense action drama. Finally, Murali Sharma dancing to Samajavaragamana from Ala Vaikuntapuramloo’s hit song will undoubtedly make people laugh. The stunning background score by Chaitan Bharadwaj and the lavish visuals by Daniel Viswas raise the bar for this romantic comedy.

Murali Kishore Abburu is the director. Bunny Vas bankrolled this movie and Allu Aravind is presenting the film. Kashmira is the heroine while Murali Sharma is doing a key role. Daniel Viswas is the director of photography. Marthand K Venkatesh is the editor.