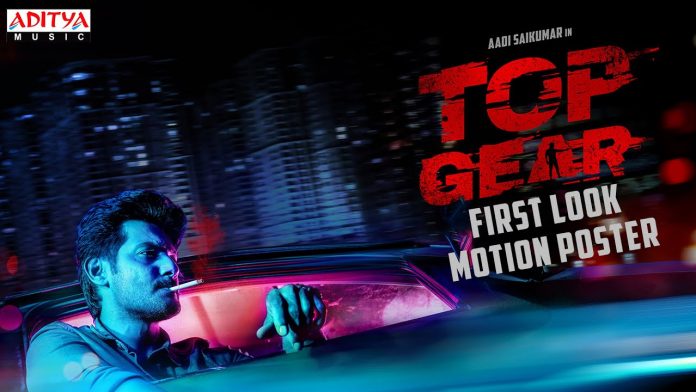 Young and versatile actor Adi Saikumar has lined up some interesting projects which are in different stages of pre-production, production and post-production phases. His ongoing film Top Gear being directed by Shashikanth is a commercial entertainer. Aditya Movies & Entertainments is presenting the film to be made under the banner of Sri Dhanalakshmi Productions. It’s a novel concept movie which is first of its kind in Telugu.

After intriguing with the title poster, they have dropped first look poster as well as a motion poster. Aadi looks quite stubborn in the first look poster where he is seen smoking cigarette, while driving a car in the night in the city. The motion poster is an attention-grabbing one. Aadi enters a road tunnel, where he takes a bag from an anonymous person. Then, police start chasing him. His car flips over couple of time and Aadi’s face is revealed in the end. The motion poster designed as an animation is of top standard. This indeed designate the production standards of the movie.

Aadi Saikumar plays an action-packed role in the movie that stars Riya Suman as the leading lady. Produced by K. V. Sridhar Reddy, the film has Giridhar Mamidipalli as the executive producer. Sai Sriram, who worked as a cinematographer for several superhit films, is working on the film. Music is by Harshavardhan Rameshwar.

Prawin Pudi, who has worked as an editor for many blockbusters like ‘Julayi, Attarintiki Daaredi, S/O Satyamoorthy, Manam, Soggade Chinni Nayana’, is the editor of this movie. Ramanjaneyulu is working as the Art Director.