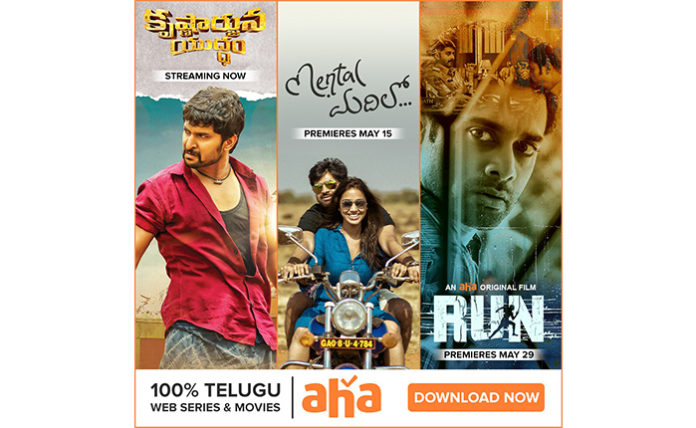 The 100% Telugu movies and web series platform aha have recorded yet another success with the recent World Digital Premiere of Kanulu Kanulanu Dochayante starring Dulquer Salmaan and Ritu Varma with the film crossing 10 million viewing minutes within only a week of launch.

Since its launch in February, viewership has been on the rise, and aha is fast becoming the ultimate destination for Telugu entertainment. Meeting the constant demand for new content, the month of May sees the release of three blockbuster movies.

The Nani-starrer Krishnarjuna Yuddham starring Nani premiered on May 8th. Now aha is gearing up for the release of the coming-of-age love story Mental Madhilo starring Sree Vishnu and Nivetha Pethuraj on May 15th. The movie bonanza will keep going on with yet another aha original film Run premiering on May 29th. The captivating murder mystery that stars actors Navdeep and Pujita Ponnada in the lead is produced by Rajeev Reddy on the First Frame Entertainment banner.

aha has an ever-growing library of latest blockbusters and classics alongside original web series and is emerging as the go-to for Telugu audiences across the globe when it comes to streaming choices.