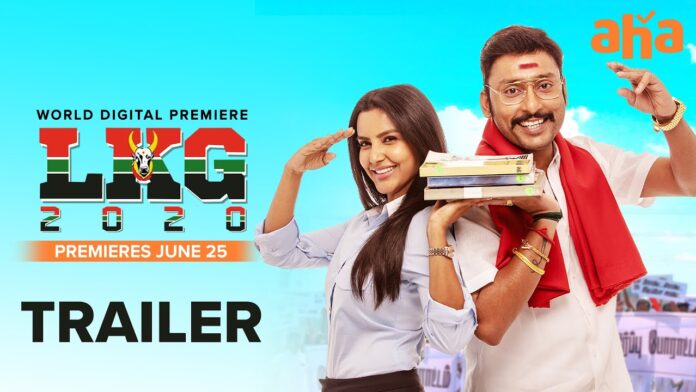 100% Telugu platform aha is yet again proving its commitment to deliver quality entertainment to viewers week after week with the latest blockbusters, web shows, and originals. Doubling the joy of viewers this weekend i.e. June 25, two critically acclaimed films LKG and Jiivi, will have their worldwide Telugu premiere on aha. While Jiivi is an action thriller with a riveting premise that’ll keep you on your toes, LKG is a witty political comedy throwing light on the ways of modern-day politicians.

Starring Vetri, Karunakaran, and Rohini in key roles, Jiivi is a story about a streetsmart youngster who decides to steal from his landlady’s house after a failed romance. Directed by V.J. Gopinath, the slick thriller earned rave reviews upon release (in Tamil, 2019) with several critics labeling it an intelligent film bolstered by strong writing and an engaging screenplay.

LKG is a smart political satire, directed by Prabhu, featuring Priya Anand, JK Rithesh, RJ Balaji. Co-written by the actor RJ Balaji himself, the film mirrors popular practices in politics and addresses issues like red-tapism, systemic corruption in a lighter vein. The story chronicling the rise of LKG, a councilor of a small town who hopes to become the CM of the state leaves you in splits and makes you think as well.

Two films in two different genres, Jiivi and LKG are here to satiate a movie lover’s quest for perfect popcorn entertainment. That’s not all, Aha has an extensive lineup of popular shows, movies including Krack, Naandhi, Zombie Reddy, 11th Hour, Chaavu Kaburu Challaga, In the Name of God, and Kala to name a few. Trust aha to make your weekends livelier and glitzier.