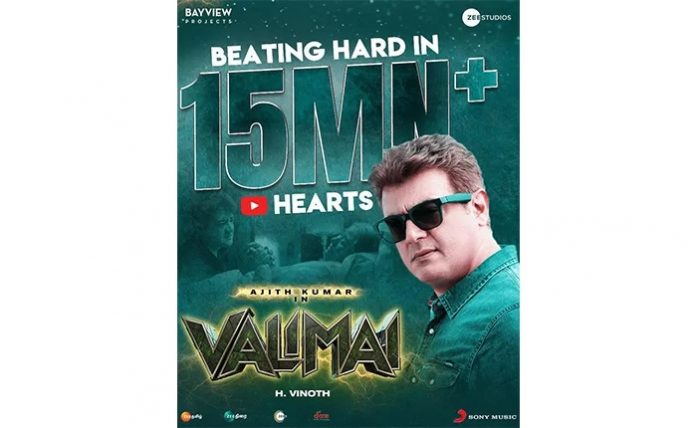 This year 2021 is closing on a high, and how! For an entire year gone by there has been a massive build up for Tamil film Valimai. Frankly, the craze around the film has been unparalleled. if there is one film that has been hyped the most and is on top of the mind of cinegoers on a pan-India level, it’s Valimai.

Well, the day has arrived and the wait has turned out to be truly worth it, what with the trailer turning out to be truly massive. A big film needs a big promo indeed and the duration is also just apt for it, what with its running time being a little over 3 minutes 5 seconds. Though the promo that has been released yesterday Dec 30th for now is in Tamil,  has garnered over 15 million views on YouTube and won praise from several quarters. Fans have predicted that actor Ajith would set the screens on fire again with this film. Loaded with action blocks and mass elements, the theatrical trailer of  ‘ Valimai’ gives a glimpse of what the makers have readied to cater to the audience, at the theatres. the Hindi and Telugu version would be out in a week for now. That said, language is not a barrier for this promo and the reason is plain and simple – an abundance of action!

That’s right; there is so much of action-packed in these three minutes that you don’t really worry much about the language part. Ajith is shown as a cop and then there is a biker gang involved. All of this results in some daredevil bike stunts that promise to be an altogether new experience for the Indian audience. Of course, there are cars and buses involved as well which make one recollect many such action entertainers. However, Valimai director Vinoth creates something new with his action director here and together they have shown bikes on screen in a way that has never before been done by any other Indian filmmaker.