The album of Ala…Vaikunthapurrammuloo is rocking the music charts since last month. Already, Samajavaragamana and Ramulo Ramula became chartbusters and are clocking millions of views on Youtube and the other music platforms. Meanwhile, the makers have announced yesterday that the teaser of the third track of the film, OMG Daddy will be out today at 10 AM.

As promised, the song teaser came out just a while ago. The team officially tweeted, “A Children’s Day treat from Stylish Star @alluarjunand #AlaVaikunthapurramuloo team. #AlluArha & #AlluAyaan present you our #OMGDaddy song teaser!! Full song will be out on 22 Nov. #AVPL3rdSingle”

The major thing which makes this song special is the teaser of Allu Arjun’s kids Ayaan and Arha. Their cute expressions to the lyrics “OMG Daddy, Just don’t be my baddie….Don’t be so hardy, that will make me saddy..” are too adorable.

Roll Rida, Rahul Sipligunj, Blazee, Rahul Nambiar and Rabbit Mac have sung the song in Thaman’s composition and Krishna Chaitanya has penned the lyrics for it.

Starring Allu Arjun and Pooja Hegde in the lead roles, Ala…Vaikunthapurrammuloo is being directed by Trivikram. Tabu, Jayaram, Sushanth, Nivetha Pethuraj, Navdeep and Rahul Ramakrishna are playing the other important roles in the film. It is all set to hit the screen on the 12th of August, as a Sankranthi festive treat. 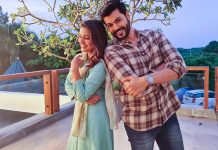