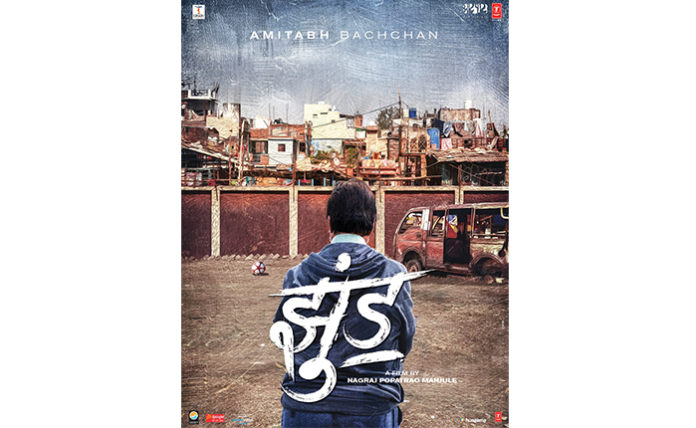 Bollywood Megastar Amitabh Bachchan has teamed up with Sairat fame director Nagraj Manjule for a biographical sports-drama tilted “Jhund” movie. Today Amitabh Bachchan Jhund First Look Unveiled online by Big B himself and the teaser of the film will be released today to give a glimpse of the movie. Jhund first look poster is designed uniquely along with hinting the precocious of the flick with a football, a slum in front of Amitabh Bachchan and clues about the actor building a soccer team.

Jhund movie is based on the life of Vijay Barse who has founded NGO Slum Soccer and Amitabh Bachchan’s character will encourage the street kids to build a football team. Jhund film has completed its filming in August last year and it’s expected to get released in April this year. Akash Thosar and Rinku Rajguru are playing crucial roles in Jhund film and both actors are working with Nagraj Manjule after Sairat. Jhund is jointly bankrolled by Bhushan Kumar, Krishan Kumar, Raaj Hiremath, Savita Raj Hiremath, and Nagraj Manjule on T-Series, Tandav Films and Aatpat Production banners.