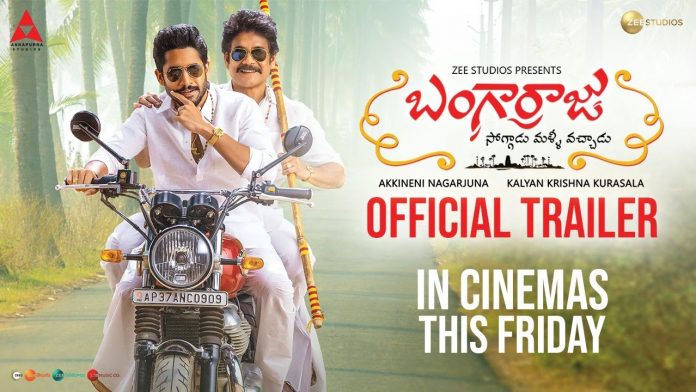 Sankranthi celebrations begin with the makers of King Akkineni Nagarjuna and Yuva Samrat Naga Chaitanya’s Bangarraju treating us with pre-festival bonanza as the theatrical trailer of this out and out family entertainer directed by Kalyan Krishna Kurasala is out now.

As Nagarjuna assured during the musical night event, the trailer exceeds all the expectations with healthy entertainment, heart-touching emotions, glamor feast, and colorful sequences.

Justifying the tagline Soggadu Malli Vachadu, Nagarjuna and Naga Chaitanya make an entry in back-to-back episodes where both are seen flirting with different girls. While Bangarraju is busy romancing angels of paradise, China Bangarraju leaves no place to flirt with angels in his village. Satyabhama (Ramya Krishna) joins Bangarraju after she passes away. While the playboy acts of China Bangarraju annoy her, Bangarraju is happy to see the romantic side of his grandson.

Krithi Shetty is introduced as village president who feels that she is the smartest. Both Chay and Krithi looked cute as pair on screen. Things change drastically in the latter part as supernatural elements are shown. Nagababu appeared as Yama Dharmaraju. The visual effects in the last portions are top-notch, particularly the flood sequences.

Nagarjuna is at his usual best as Nagarjuna, wherein Naga Chaitanya pulled off the role of China Bangarraju credibly. Krithi Shetty is cool as village president, while Ramya Krishna did her part effectively. Kalyan Krishna must be appreciated for balancing all the characters, making sure it has all the elements, and exceeding the expectations one would have on a sequel.

The visuals look vibrant, thanks to J Yuvraj’s wonderful cinematography. Anup Rubens elevates the mood with his lively background score. VFX and editing, everything about the film including production design are superb.

Soggade Chinni Nayana was released for Sankranthi became a box office winner for the festival. Now, Bangarraju is sure to rewrite the history, as the trailer looks highly entertaining.

Zee Studios is co-producing the project with Annapurna Studios Pvt Ltd. Nagarjuna is the producer. Satyanand has penned the screenplay for the movie.