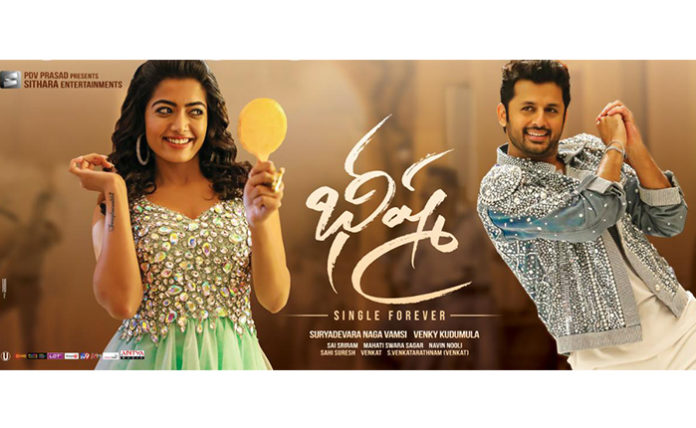 Written and Directed by Venky Kudumula

Bheeshma is a degree fail carefree guy who falls in love with Chaitra (Rashmika Mandanna). Her father is ACP Deva (Sampath) doesn’t like Bheeshma. All of a sudden, Bheeshma is appointed as a CEO. Why is the selected and what happens to his love story forms the rest of the story?

Nithiin is terrific in Bheeshma. He oozes confidence and great charisma throughout the movie. Bheeshma is all about how effortlessly he pulls off the role without breaking a sweat. Be it comedy or romance, Nithiin does it with clinical precision and ease like never before.

Rashmika Mandanna is equally at ease playing a character that acts responsibly. It is a different one for her compared to her recent outings. It showcases her versatility. The real highlight though is the chemistry she shares with Nithiin. It is sensational.

Apart from the lead actors, Bheeshma is filled with numerous artists who have small but impactful roles. Anant Nag and Jissu Sengupta play the crucial pillar-like parts on which the movie rests. Anant Nag brings his seniority into play and brings a statute to the character. Jissu brings the much-needed swag to the antagonist part. Sampath seen after a gap comes up with serious yet hilarious acts in his unique style.

The rest is comedy parts done by Vennela Kishore, Raghu Babu, Naresh, and Brahmaji. Vennela Kishore gets the meatiest role among them and he aces it with his comedy timing. Although others too are no less. It is just that their parts are smaller in length.

The Story is a bit thin

Director Venky Kudumula is back with a new outing after blockbuster Chalo. Once again, he has come up with an out and out entertainer with a simple storyline.

Venky Kudumula keeps the narrative suspenseful throughout and packed it with lots of entertainment. The latter keeps one smiling whereas the former keeps one engaged to know what happens next. This despite a predictable story on offer highlights the command of director on the medium. His firm grip on the narrative never lets the attention drift away. One thing after the other keeps coming the audience way to hook them.

The WhatsApp comedy block in the first half and team meeting with the CEO in the second half are a couple of examples that makes the audience jump in joy. And there are many more.

The organic farming topic gets repetitive after a point. But it never gets out of the track that can affect the narrative. The ending is wrapped up funnily. It makes Bheeshma a must-watch for the season.

The various technical departments have all delivered to the best of their abilities. Mahati Swara Sagar has done a wonderful job with the songs and background score. The cinematography by Sai Sriram is excellent. The movie bears a rich and opulent look throughout. The editing by Naveen Nooli is done crisply. The writing is extraordinary. Venky Kudumula takes all the honor in that regard.

The producer Suryadevara Naga Vamshi needs to be applauded for the extremely rich production values. His wholehearted support to the team in giving in their best needs special mention and appreciation.