Netflix and D2R Indie, Raj and DK’s new age filmmaking initiative, launched the trailer of their maiden production “Cinema Bandi.” In just two days, the trailer which now cumulatively reached 1 million-plus view, became one of the most talked-about films in Tollywood and Bollywood.

Directed by debutante Praveen Kandregula, Cinema Bandi is an authentic comedy that mixes everydayness and extraordinary in a tale capturing the trials of a village making a film. All with a lost camera that an auto driver finds in his auto. The film is made by a group of first-time actors and filmmakers, in a village nearing the border of Andhra Pradesh and Karnataka. The characters speak in a dialect that has rarely been heard on celluloid, a cacophony of Telugu and Kannada. Throw into this plot, a wide ensemble of characters – a carefree auto driver, a dying grandfather, a passionate barber, a smug photographer, a fierce vegetable seller, and the camera owner, the setting is bound to be hilarious. With the tagline, ‘Everyone is a filmmaker at heart, the film promises a laughter riot.

On Friday, the filmmaker duo Raj and DK released the trailer of the film across various platforms on Netflix. Taking to Twitter, the makers wrote, “Presenting the trailer of CINEMA BANDI — an independent film made under #D2Rindie. A sweet little film — about making a film — with loads of humour and a huge heart! https://youtu.be/vRzgLJMP4zc On Netflix, May 14. #CinemaBandi #CinemaBandiOnNetflix Please stay safe. Wear a mask.”

The trailer spread like wildfire as soon as it was released on all social media platforms. It received very favourable and consistently positive responses. Not just audience, but from every nook and corner of the Film Industry and Media, reviews started pouring in. And that is not just limited to Tollywood, even Bollywood toasted the freshness, humour and heart in the film. The trailer crosses 1M + views in just two days, which is a terrific feat for a film made by all first-time filmmakers and absolutely no known faces. These purely organic and word of the mouth views and reviews definitely show how peaked audiences interest are to watch the film.

On Friday, Samantha Akkineni shared on Instagram her love for the trailer, writing, “This looks so honest. In the midst of all the chaos, this trailer made me smile. Thank you and all the very best to the team of #cinemabandi.”
A true indie 🙂 Kudos to the entire team for pulling this off!” Manoj Bajpayee wished the entire team of the film good luck. The next day, Shahid Kapoor took to Instagram to share the trailer and wish the makers of the film too.

Raashi Khanna took to Twitter, “I had a smile throughout while watching this! So, endearing & innocent! #CinemaBandi, a sweet little film, about making a film, with dollops of humour & a huge heart!”

National Award-winning directors Tharun Bhascker and Nag Ashwin have also shared on Instagram their excitement for the trailer. “This film will be a sensation, mark your calendar. Congratulations @Praveen Kandregula for this amazing film. Enjoyed every moment :).” Posted Tharun while Nag Ashwin shared” so excited for this.”

Telugu Cinema veteran producers Aswini Dutt and Suresh Babu have appreciated the makers of the film for their attempt. The trailer stands as a textbook example of how a good story or a good film can be watched, recognized, and appreciated by anyone, anywhere in the world.

In trying times like these, Cinema Bandi definitely proves to be a film that will, if not anything, bring a little cheer and happiness into all our lives. The film releases on May 14th, premiering on Netflix. 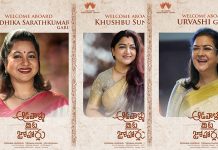