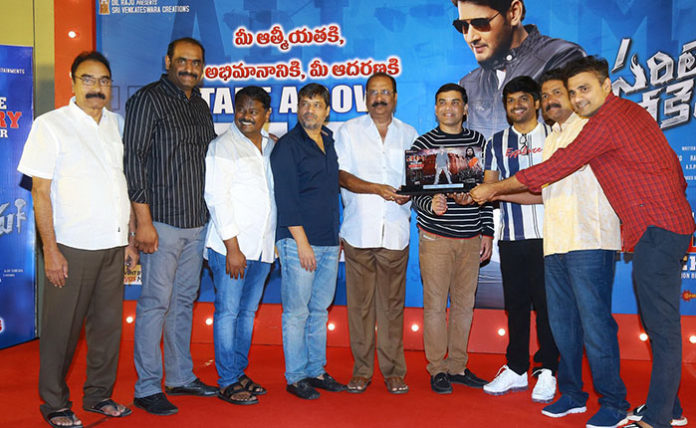 Superstar Mahesh‘s latest outing, out and out commercial entertainer, ‘Sarileru Neekevvaru‘ presented by Dil Raju under Sri Venkateswara Creations banner, Produced by Ramabrahmam Sunkara in GMB Entertainment and AK Entertainments. Rashmika Mandana played as a heroine while Lady Amitabh Vijashanthi is seen in a powerful role as Professor Bharathi. The film which was released on January 11th as a Sankranthi gift has received a tremendous response from the audience creating a huge sensation at the box-office and stands as an All-time Industry Blockbuster (Non-Baahubali 2). The film successfully completed it’s 50 days of theatrical run on February 29th. Super Fans are celebrated the Massive success of ‘Sarileru Neekevvaru’all-over. On this occasion, the team has held an event to celebrate the 50 days of ‘Sarileru Nekevvaru’ at Park Hyatt Hotel, Hyderabad. Darsakendrudu K. Raghavendra Rao, Sensational Director VV Vinayak graced the event as chief guests. Producer Anil Sunkara hosted the event and welcome the guests. Movie Presenter, Sri Venkateswara Creations Dil Raju, Director Anil Ravipudi, Producer, Sri Venkateswara Creations Sirish, Fight Masters Ram – Laxman, Sekhar Master, Distributors and Exhibitors of the film attended the event.

Darsakendrudu K. Raghavendra Rao said, ” ‘Sarileru Neekevvaru’ title itself suggests that it has everything. Mahesh as a Hero, Anil Sunkara and Dil Raju as Producers and Distributors have proved themselves as ‘Sarileru Meekevvaru’. Doctors can suggest Anil Ravipudi’s films for depression. He is making such kinds of entertainers. His every film carries a very good message. I wish this team to get many more successes in the future.”

Sensational Director VV Vinayak said, ” Anil Sunkara who is very passionate about films delivered a huge blockbuster with the support of Dil Raju Garu who is highly experienced as a distributor and producer, Sirish Garu. ‘Sarileru Neekevvaru’ has broken all records. I like Anil Ravipudi a lot. I wish he will continue delivering super duper hits like this and entertain everyone. When I see here the exhibitors and distributors I know, I feel like meeting my family members. It’s really a great thing that quickly completing a film with a superstar like Mahesh and released it for Sankranthi breaking all the records.”

Film Producer Anil Sunkara said, ” Right from the beginning, during the launch of ‘Sarileru Neekevvaru’, Distributors and Exhibitors had very positive vibrations for this film and they believed that this will definitely become a big blockbuster. EVery event of this film has created a new trend. After its release, The film has surpassed everyone’s expectations and collected huge numbers at the box-office. I feel blessed to see the happy faces of all distributors and exhibitors in this event even after completing 50 days run. For our Director Anil Ravipudi’s Confidence… His Passion… Achievement… For your love… Support…. Take A Bow.”

Sri Venkateswara Creations founder, Film Presenter Dil Raju said, ” ‘Sarileru Neekevvaru’has successfully completed it’s 50 days theatrical run. Anil Ravipudi said to Anil Sunkara Garu and to me that he will complete the film and release it for Sankranthi and will deliver a blockbuster. He has kept his word. Congrats and Thanks to Anil Ravipudi for scoring a career-best film for Mahesh Babu Garu and for delivering the number one film in the industry. Special thanks to the Distributors and Exhibitors of this film.”

Producer, Sri Venkateswara Creations Sirish said, ” Thanks to Anil Sunkara Garu and Anil Ravipudi Garu for delivering such a big blockbuster with ‘Sarileru Neekevvaru’. Thanks to Raghavendra Rao Garu, Vinayak Garu for attending this event as chief guests. Special Thanks to the distributors and exhibitors who are the reason for this big success.”

Young and Talented Director Anil Ravipudi said, ” Heartful thanks to Telugu Cinema Blockbuster Kaa Baap Raghavendra Rao Garu and Commercial Kaa Baap Vinayak Garu for coming here today. Darsakendrudu K Raghavendra Rao Garu provided a graph for Telugu Cinema and set the benchmark about how to make a proper commercial film. While making such commercial film one can get the confidence of scoring a blockbuster with Vinayak gari mark taking to it. Vinayak Garu is the reason why I became a Director. While I was watching ‘Aadi’ in Harihara Mahal at Guntur, a boy threw two bombs and then appears Story – Screenplay – Direction VV Vinayak name card onscreen. The entire theatre is filled with whistles and claps. I got goosebumps knowing that a director has such a kind of following and wave among the audience. At that moment I decided to enter the film industry as a Director only. I am proud to stand among the directors who uplifted the status of Telugu Cinema with their Films. This year’s Sankranthi is memorable for Telugu Cinema. We have seen Mind Block revenues. I wish that this revenue will keep on increasing every year. Special Thanks to Super Star Mahesh Babu Garu who has listened to my story and agreed to do the film while I was doing ‘F2’ and believed me. He asked me only one thing to deliver a Mind Block Blockbuster. I am very happy about delivering what he has expected from me. I wish the audience will keep loving all of my films. ‘Prekshakuluu… Sarileru Meekevvaru…’ “ 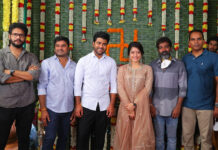 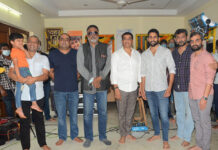 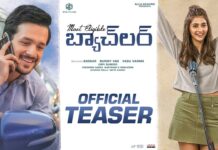