Supreme Hero Sai Dharam Tej is currently busy working on an exciting project Prathi Roju Pandaage. Directed by Maruthi, the film is bankrolled by UV Creations and GA2 Pictures under the presentation of Allu Aravind. Raashi Khanna is playing the leading lady while Rao Ramesh and Satyaraj are part of the project, playing crucial roles.

The film unit is completing the shoot and they wanted to release the film on time. The makers released an update that the dubbing works of the film are going on at a full swing. Taking to Twitter, the makers released a glimpse of Sai Dharam Tej dubbing for the film.

The film hits the screens on 20th December. 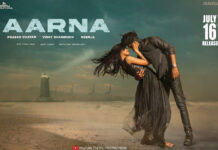