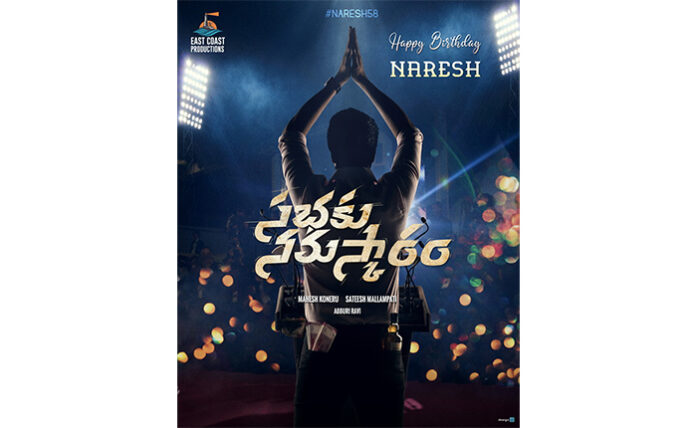 Allari Naresh, who earlier this year pulled off a super duper hit with ‘Naandhi’ and won the applause of both audiences and critics for his versatile performance, has joined hands with East Coast Productions. ‘Sabhaku Namaskaram’ is the title of their movie together. On the occasion of Naresh’s birthday today (June 30), the makers have unveiled the title poster. Sateesh Mallampati is going to debut as a director with this promising project. This 58th movie of Naresh is produced by Mahesh Koneru.

The title poster features Naresh standing on the dais with his hands raised in a ‘Namaskaram’ posture in front of the mic. In one of his pockets are seen wads of currency, while a liquor bottle pops out from the other pocket. ‘Sabhaku Namaskaram’ is being made as a political entertainer that takes a dig at the ways of political parties at the time of elections. This is the first time that Naresh is doing a subject of this sort.

Abburi Ravi, who has penned sharp lines for several movies over the years, is on board to write dialogues. The film will go on the floors in the second half of September.

The makers will announce the rest of the cast and crew details soon.