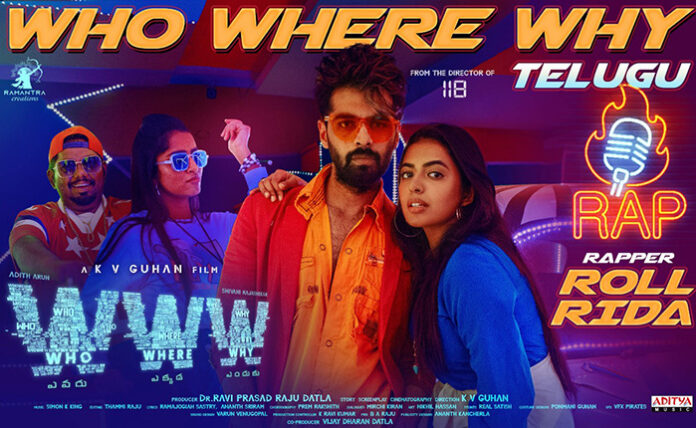 Popular Cinematographer KV Guhan after delivering a SuperHit ‘118’ is now coming with a Mystery Thriller, ‘WWW’ (Evaru.. Ekkada.. Enduku..) as his latest film. Adith Arun and Shivani Rajashekar are playing the lead roles. Dr. Ravi P. Raju Datla is bankrolling this film under Ramantra Creations banner. Today team released a catchy RAP video song, ‘Who.. Where.. Why’ Lockdown song. This is an attempt by the WWW team to bring some positive vibes and smiles in these tough times during COVID 2nd wave, with this energetic RAP song about Lockdown life. Team also thanked front-line workers who are defending against infection and urged everyone to stay safe and enjoy the song. Simon K. King composed this song while Roll Rida penned lyrics as well as crooned the song. The song is getting a very good response on social media. On this occasion.

Director KV Guhan said, ” ‘WWW’ is the first computer screen thriller movie in Telugu. The film is being made as a dual language straight film in Telugu and Tamil languages. Post-production works are going on. This will be a different film in the thriller genre.”

Producer Dr. Ravi P. Raju Datla said, ” We all know about the current scenario our country is facing now due to COVID second wave. We made this song thanking front line warriors who are fighting and protecting people from COVID and to bring positivity during these tough times by wearing masks, following social distance which keeps Corona away.”

Arun Adith, Shivani Rajashekar, Priyadarshi, Viva Harsha, and others are the principal cast