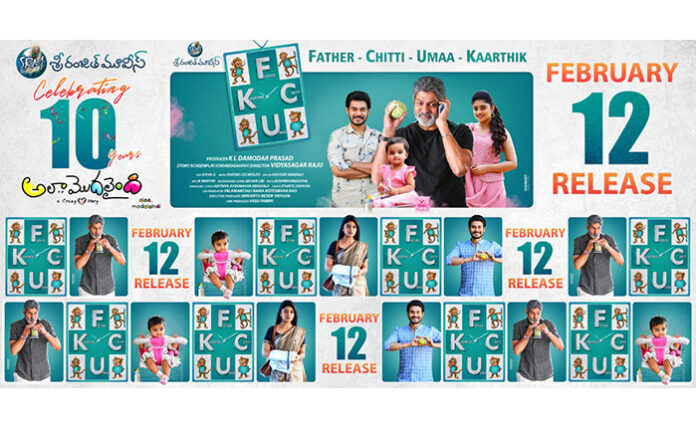 FCUK (Father Chitti Umaa Karthik) Movie with Jagapathi Babu as the lead protagonist and young stars Ram Karthik and Ammu Abhimrami in the titular role and Baby Sahistritha as the fourth protagonist in the title will release on February 12th, 2021. Sri Ranjith Movies made the announcement at the 10th-anniversary celebrations of one of its gigantic hits ‘Alla Modalaindhi’. Directed by Vidyasagar Raju, ‘Father Chittie Umaa Karthik’ movie which has become popular by the acronym FCUK has been creating ripples by the unique character videos about each of its four title characters has created high anticipation. Speaking to the media at Ramanaidu studios today, Jagapathi Babu said he is very enthused by the fantastic response to the sneak peeks too far and said he is looking forward to bringing it to the audiences on February 12th.

The program started with the observance of two minutes of silence for Producer & Distributor Sri. V Doraswamiraju passed away this morning. Speaking on the occasion Producer DamodarPrasad Garu recalled the association of his later father Sri. Ranjith Kumar with Doraswamiraju Garu. He also said that though covid has caused irreversible damage to the industry, movies like Solo Brathukay So Better, Krack, Red, Alludu Adhurs being brave to release in theatres and audiences braving the restrictions to watch at the theaters and making the movies a success has given a lot of confidence to the film fraternity. He thanked the producers, directors, audiences, and actors for the same.

He said that some have said that the FCUK title is being misunderstood and that he takes the opportunity to make it clear that Sri Ranjith Movies will never make a movie that will make anyone lower their head. “Though cinema is a commercial venture, I always made movies with certain values,” he said. Though FCUK was scheduled to release in April 2020 it was delayed due to pandemic and will be released on 12th February 2021. He also expressed happiness for announcing this on the occasion of the 10th anniversary of Ala Modalaindhi.

Jagapathi Babu too expressed sadness over the passing of Sri Doraswami Raju and recalled his time working with him. He said that producer Dammu movies are all very tastefully done. He praised Director Vidyasagar Raju for the fantastic movie. He said that the teaser itself is so convincing that many were asking if it was his actual story.

Director Vidyasagar Raju said that he hoped that the movie will up the spirits of the audiences in this new year after together facing the toughest pandemic known to this generation.

Hero Ram Karthik said that he is happy that the movie is going to release on Jagapathi Babu Garus Birthday and Dhammu Garu’s birthday. He expressed his gratitude for getting a chance to share the screen with Jagapathi Babu
At this event cinematographer Siva. G, Executive Producer Srikanth reddy Paturi, line Producer Vasu Parimi, and other unit members have participated.