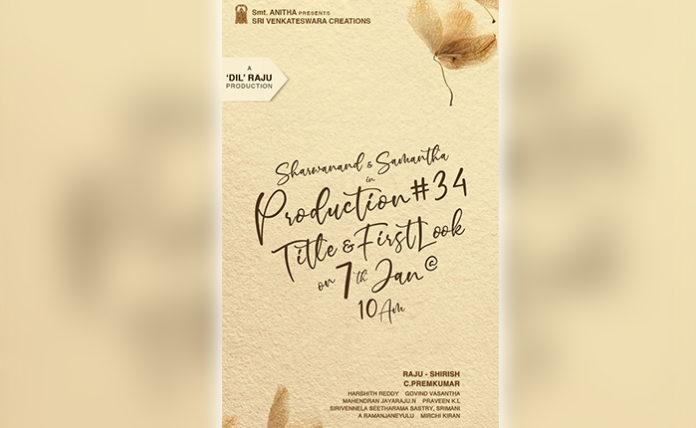 The most awaited update about Samantha Akkineni and Sharwanand 96 Tamil remake in Telugu is given by Sri Venkateswara Creations in their official social media account. SVC Official accounted posted today as

“Get ready for a blissful dose of love! The first look and title of Production No 34 starring #Sharwanand & @Samanthaprabhu2 will be announced at 10 am on January 7th… @SVC_Official #PremKumar @Govind_Vasantha #JMahendran @CinemaInMyGenes #SVC34”

Vijay Sethupathi and Trisha’s performances in the original 96 movie has won the hearts of the audiences. Now Sharwanand and Samantha Akkineni to recreate the magic in Telugu.  Star producer Dil Raju has purchased the Telugu remake rights and desired to showcase the heart touching love story to Telugu audiences. Other than the lead cast, few other actors rest of the technical team of the 96 Tamil are working for the Telugu version. Let’s wait for one more day to know more details about the Telugu version of Sharwanand and Samantha Akkineni’s 96 from the production house.