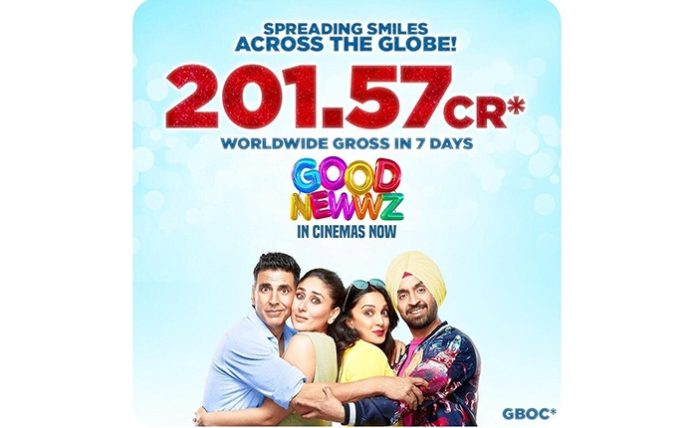 Good Newwz is becoming unstoppable at the box office with its collections and the numbers that makers are revealing shows the love that movie buffs on showering on the film in the cinema halls. Good Newwz made a double century in one week at the box office and Dharma Production has proudly announced the first week collections with a poster in social media.

Good Newwz made a double century. It has collected 201.57 crores gross in one week as per official reports by the production house. Along with the situational comedy, the emotional content that revolves around the IVF process has clicked with the audiences from all sections of the corner that’s helping with showering collections at the box office.

With the success of Good Newwz making hundreds of cores at the box office, hero Akshay Kumar has become the highest-grossing actor of the year 2019 with back to back hit films into his account. Good Newwz also marks the second double century movie in the filmy career of Kiara Advani as a heroine. With no big releases around the corner, Good Newz has bright chances to make another 200 crores plus and make it place in the highest grosser of 2019.