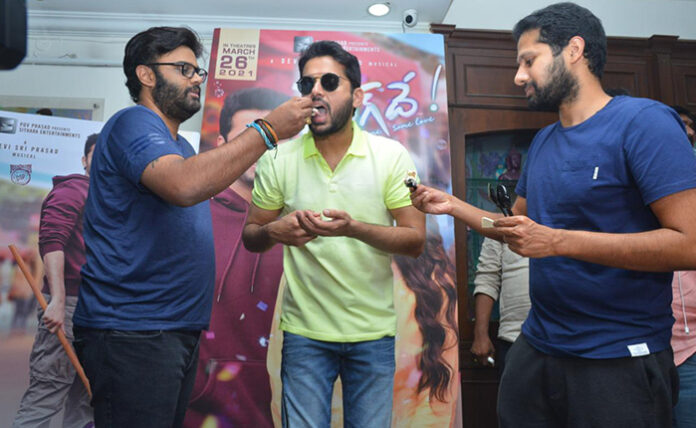 Youth star Nithiin and National Award-winning actress Keerthy Suresh starrer ‘Rang De’ was directed by Venky Atluri and produced by Suryadevara Naga Vamsi under Sithara Entertainments banner, released at the box office on Friday and received a unanimous positive talk. With such a reception, the success celebrations were held at Sithara banner’s office in Hyderabad.

Speaking on this occasion hero Nithiin said, “The response to the film is superb. Audiences are thoroughly enjoying the comedy and emotional elements in the movie. The chemistry between me and Keerthy Suresh worked out really and Keerthy’s role is getting a lot of appreciation. So do for my role. I would like to thank all the audiences who are pouring down a lot of compliments. This is my third film in Sithara Entertainments and I’m really happy to score a hat-trick with this banner. The box office collections of the film are improving with every. We are getting reports that matinee collections are better than morning and so on. Hopefully, the weekend collections will be far better.”

Director Venky Atluri said, “This moment is like a student waiting for his result after writing an exam. I’m so happy that the result is very positive. We are receiving positive vibes from all areas. We woke up this morning with good news from overseas but we are still nervous. Nithiin, Keerthy, music composer Devi Sri Prasad and cameraman PC Sreeram are the four pillars of this film.  I will be indebted to the Sithara Entertainments banner and I will work with them in the future. Also, it’s no sentiment that films have a foreign backdrop. It’s just a coincidence and initially, we planned to shot in Italy but due to pandemic we shot in Dubai.”

Producer Naga Vamsi said, “Everyone who has watched the movie is saying positive words about it. Most importantly the media people have liked ‘Rang De.’ Some have liked the comedy and others emotional element. It’s a completely packaged film. Also, the collections are getting better with every show and we hope that the collections will be for good in the weekend and ‘Rang De’ will become a big hit under our Sithara banner.”

Before that hero, Nithiin cut the cake along with director Venky and producer Naga Vamsi and rejoiced the success.