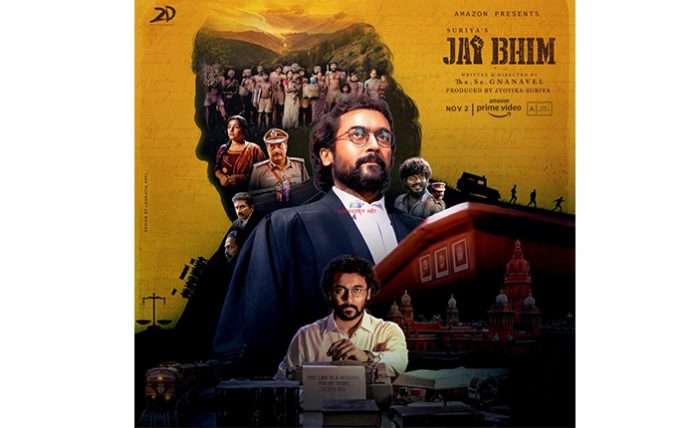 Written and Directed by TJ Gnanavel

Versatile Star Suriya after Sensational ‘Soorarai Pottru’ (Aakasam Nee Hadduraa) last year has come up with another interesting film which is a courtroom drama Jai Bhim. It is released today on Amazon Prime. Directed by TJ Gnanavel. Here’s the review.

A tribal woman Sinathalli (Lijomol Jose), with the help of lawyer Chandru (Suriya), is fighting a battle in the court as she is in the process of unraveling the mystery around the disappearance of her husband Rajanna (Manikandan) who was falsely accused by police in a theft case. With all the biggies, none other than cops being involved in this case, the story takes a lot of twists and turns, and a lot of truths being revealed with each passing day. Now how does the lawyer manage to bring the truth out, forms the crux of the story?

Suriya has to be appreciated for playing a key role in this film, and also for producing it. He went into the skin of the character he is playing and he is beyond amazing. It’s a serious role and needs a lot of dedication to play one. Suriya has done it outstandingly well.

Lijomol Jose, Manikandan, Rajisha have done a good job. Prakash Raj plays IG Perumalswamy in this film and of course another actor who impresses you as much as Suriya does. He plays a positive role this time and is also a key that helps the system know who the culprit is. Rao Ramesh is a perfect fit and did justice to his role.

Director TJ Gnanavel has previously directed a film called Kootathil Oruvan and it has been a huge hit. In this film also, he has done a good job. The story itself is a hero here and it shows how police can create a drama to make sure they are always on the safe side. The films show the bitter side of our policy and also how the people from the tribes and other lower castes are framed for the crimes they have never done, just because someone from the upper caste has to be saved. The screenplay and narration play a key role here and it is great actually.

The film is based on the life of a lawyer turned justice K Chandru who fought more than 96,000 human rights cases for free. He fought for the justice of people from the scheduled caste.

The Cinematography gives a much-needed feel to the film. Music and BGM by Sean Roldan elevate the film whenever it is necessary. Producers Suriya and Jyotika deserve appreciation for backing such a gutsy and important subject. They are also appreciable for delivering it with high-class production values. With all the good things that the film has, it is worth a watch this festive season.

Bottom-line: Suriya Nails The Performance In This Intense And Gripping Courtroom Drama