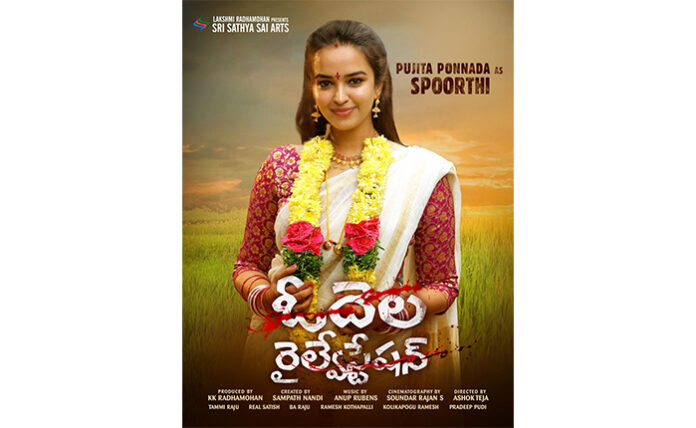 Recently released looks of Hero Vasishta Simha as Tirupati, Heroine Hebbah Patel as Radha, and Sai Ronak as IPS Officer was unveiled and received a superb response. Sai Ronak is playing the role of a powerful IPS officer Anudeep in the film. Pujita Ponnada is playing a crucial role in this film. The team released Pujita Ponnada’s look as Spoorthi and her look as New bride looks pleasant.

Pujitha Ponnada said, ” I am doing the role of ‘Spoorthi’, a very interesting character in this film. My role is very crucial in the film. I believe this film will become a very good film in my career. I am very happy to act in ‘Odela Railway station’ produced KK Radha Mohan Garu in Sri Sathya Sai Arts, Script provided by Sampath Nandi Garu Directed by Ashok Teja.”

Producer K.K. RadhaMohan said, ” Pujita Ponnada is doing a very inspiring role in Odela Railway station. Glad to release her look from the film. This film is made as a different crime thriller with a realistic approach as it is based on incidents that happened in a village named ‘Odela’. The entire shooting part has been completed. The film is currently undergoing its post-production works.”

Sampath Nandi said, ” ‘Spoorthi’ is the pillar of strength we all need in life. Hope you love Spoorthi as much as you love Pujita Ponnadacin Odela RailwayStation’