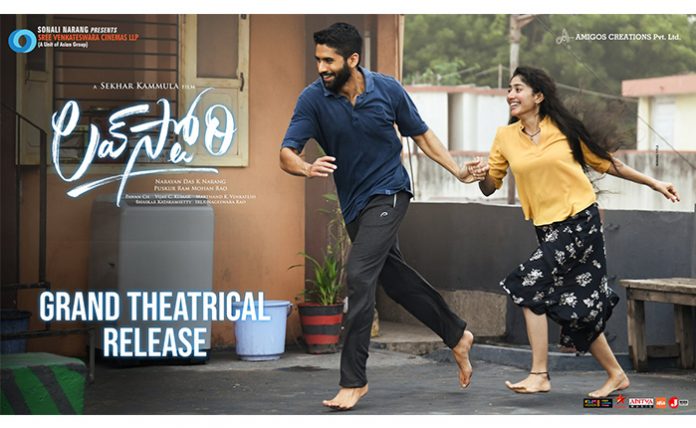 Written and Directed by Sekhar Kammula

Revanth (Naga Chaitanya Akkineni) is a Zumba Trainer running his training center. His neighbor Mounika (Sai Pallavi) is trying hard to get a job in the Software field. As she struggles to meet her daily needs, she decides to join Revanth’s dance institute as an instructor.

The conflict here is Revanth and Mounika are from the same town where Revanth is from lower caste and Mounika is from the upper caste. As fate would have it, Revanth and Mounika fall in love with each other. They face many hardships in making their love successful. The basic story deals with whether they succeeded or not.

Naga Chaitanya delivers his career-best performance. He lived in his role as a young man who has dreams but is frustrated with how society treats him. He perfectly balances his act and shows the pain perfectly.

Sai Pallavi is a major highlight of ‘Love Story’. She impresses with mature acting and fantastic dance moves. The main USP of Love Story is the lovely chemistry between Naga Chaitanya and Sai Pallavi. Their scenes are a treat to watch on screen. Be it the small quieter moments or the dramatic arts, the duo deals with them with aplomb.

Devayani, Eeswari Rao, Rajeev Kanakala, and Uttej play the supporting roles. Each one has a unique and identifiable character that gives the world of Love Story completeness. They are convincing in their parts and bring authenticity to the proceedings.

The slow pace in proceedings

The film’s first half deals in establishing characters and showcasing how love brews between the lead pair. Shekhar Kammula’s mark is evident during this first half with beautifully picturized songs. Also, the conversations, a key feature in the director’s work, are simple and relatable. They create a realistic feel to the proceedings.

The second half takes a serious turn, but things never go off the track. The caste angle has been dealt with throughout the film in a mature manner. Another critical issue, child abuse, is showcased in the latter half. It gives more depth to the film.

Sekhar Kammula manages to address different issues without getting lost. He sticks to the topic and doesn’t take any commercial escapism either. He perfectly blended those issues into the narrative in his unique style, maturely. It slows down the narrative a little bit, but as the topics are sensitive in nature, they get the preference and the proper attention.

The climax seems hurried and abrupt. It could have been dealt with well. Sekhar Kammula, known for making mature films, once again delivered with ‘Love Story’. This time he does so by handling sensitive themes captivatingly.

Music by Pawan is superb with chartbuster songs. Choreography in songs for Sai Pallavi is too good. The cinematography by Vijay C Kumar is colorful. Production Values by Producers Narayandas Narang and Puskur Rammohan Rao are incredible. They deserve a special appreciation for backing such a beautiful and thought-provoking film.