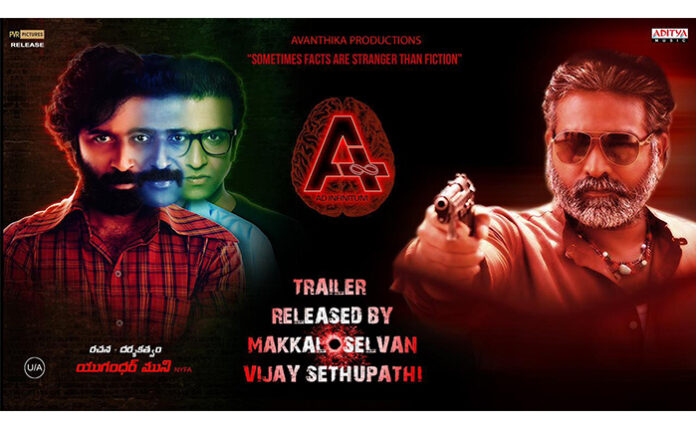 Nithin Prasanna and Preethi Asrani’s starrer unique thriller “A” is directed by Ugandhar Muni and produced by Geetha Minsala under the banner of Avanthika Productions. The teaser of the movie received rave reviews and hiked expectations on film. Now, the team comes up with a theatrical trailer for the film.

None other than Makkal Selvan Vijay Sethupathi has launched the trailer of the film today and wished the team all the best. Nithin Prasanna impresses in triple roles and Preethi Asrani makes her presence felt like the lead actress. It’s tough to judge the plotline of the film with the trailer and you will ask for more. However, one needs to wait for few more days to enjoy the film on big screens. While the cinematography was exceptional, the background score complements the visuals.

Like the teaser, the trailer too promised that the film will offer completely a new experience to movie buffs, particularly for thriller movie lovers. Living up to the expectations, Ugandhar Muni made the film appealingly to the larger sections. The film that got a U/A certificate and won the appreciation of censor officials is gearing up for grand release on March 5th through PVR Pictures.