Apurva Soni, who is a popular model and has been the face of several commercial popular brands, plays an integral role in the recently released Web series ‘Undekhi’ which is streaming on Sony LIV. The show, whose story revolves around a murder, has been garnering glowing reviews from across the board, and Apurva, in particular, Web series ‘Undekhi’ has been getting some very good responses from the critics and the audience alike.

Talking about her portraying her part, Apurva says, “My character is named Kanak. She is a dancer from the tribal group of Sunderbans. My sister and I get into an untoward situation and while trying to get ourselves out it, we fall into a bigger trap. Since it is a thriller, I will not be able to reveal much about the story. There are many layers to it and all of them have been put together very well. You will come across many thrillers on OTT platforms but what makes Undekhi different from other shows in this genre is that it delivers an important message.”

In the show, the actress got to share the screen with many veteran actors including Harsh Chhaya.

“I have a very important sequence with Harsh sir which proves to be a turning point for the show. He plays a negative character in the show and the graph of my character is closely interlinked with him. It was a great experience to work with a senior actor like him”, she says.

Apurva hails from Rajasthan and is from a family with zero connections to the modeling and film industry. Undekhi is her first stint on the web and she could not have happier with the kind of response the show is getting, Rima Mishra from Media Tribe told us in an interview.

“I am so happy about the fact that the show is getting so much love from the audience. It tries to show a mirror to the society. We see so many kinds of wrongdoings happening in front of our eyes but we choose to overlook them. I hope it makes people think and introspect. I am glad my acting career has got off to such a great start. I hope I get more such opportunities to show my prowess as an actress.”

Apurva was in talks for a couple of important projects but because of the lockdown, those projects were stalled. Now that things are opening up again slowly, she hopes to get back to doing what she loves the most – facing the camera as an actor! 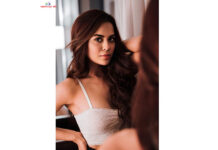