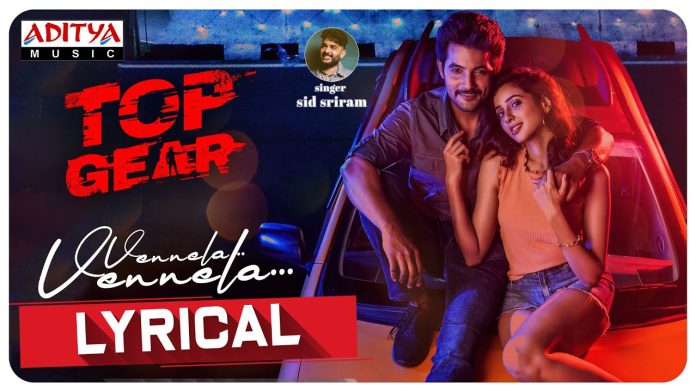 Young and promising hero Aadi Saikumar is all set to enthrall us in Top Gear which is getting ready for its theatrical release. The film directed by K Shashikanth has already completed production formalities and post-production works are also happening at fast pace. As earlier, announced by the team, the movie will have a grand release worldwide on December 30th.

Promotions are in full swing for the movie and the team began the musical promotions on a superhit note by releasing the first single Vennela Vennela, composed mellifluously by Harshavardhan Rameshwar and crooned fascinatingly by the most happening singer Sid Sriram. The popular singer creates magic with his soulful vocals. ‘Saraswathi Putra’ Ramajogayya Sastry penned some beautiful lyrics for the song which is an instant hit. The song shows the beautiful chemistry of Aadi Saikumar and Riya Suman. They look adorable together on screen.

Billed to be a pucca action entertainer laced with thrilling elements, Aditya Movies & Entertainments is presenting the film. The movie is produced by K. V. Sridhar Reddy under the banner of Sri Dhanalakshmi Productions, while Giridhar Mamidipalli is the executive producer. Sai Sriram, who worked as a cinematographer for several superhit films, is working on the film.

Prawin Pudi, who has worked as an editor for many blockbusters like ‘Julayi, Attarintiki Daaredi, S/O Satyamoorthy, Manam, Soggade Chinni Nayana’, is the editor of this movie. Ramanjaneyulu is working as the Art Director.