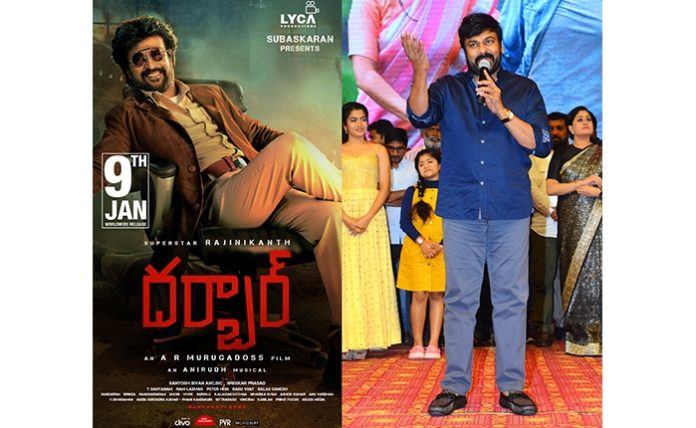 Megastar Chiranjeevi has always been fond of the South Indian Superstar Rajinikanth. The two legendary actors share mutual admiration and friendship, which has been on display on several occasions over the years. They have even acted together in quite a few movies, for example, in the Tamil remake of ‘Atthaki Yamudu Ammayiki Mogudu’. Chiru has once again expressed his love for Rajini at the pre-release event of ‘Sarileru Neekevvaru’ on Sunday.

“Megastar Chiranjeevi Said, I sincerely wish that all the Sankranthi releases, including my dear friend Rajinikanth’s ‘Darbar’, will be loved by the audience,” the ‘Sye Raa‘ actor said. He added that these films should bring fame and monies to the stakeholders involved.

‘Darbar’, coming in the direction of ‘Ghajini’ and ‘Thuppaki’ helmer AR Murugadoss, is presented by Subaskaran of Lyca Productions. This huge film has the Superstar in the role of a cop named Aditya Arunachalam. To hit the screens on January 9, it will be released by the famous producer NV Prasad in the Telugu States.