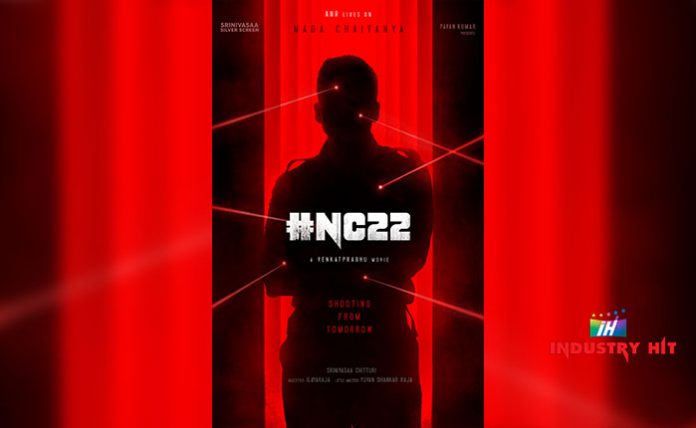 The combination of Akkineni Naga Chaitanya and Venkat Prabhu has made waves since its announcement. The film has been tentatively titled NC22. NC22 will be Chaitanya’s first Telugu-Tamil bilingual film. It will also be affable filmmaker Venkat’s first Telugu directorial.

The ambitious project was recently launched with a formal pooja ceremony, and the female lead and musicians were also announced. Krithi Shetty , has been cast alongside Naga Chaitanya. And the legendary father-son duo of Maestro, Isaignani Ilaiyaraaja and Little Maestro Yuvan Shankar Raja are going to score tunes for the film. This is their first film together and a chartbuster album is assured in the combination. This indeed is going to be one of the major attractions.

Naga Chaitanya fans and audiences were waiting for film updates with bated breath. Today’s dazzling update on the film quenched their thirst. The team is ready to begin filming tomorrow at Ramoji Film City in Hyderabad.

Announcing the news, makers wrote “With Divine Blessings of Akkineni Nageswara Rao Garu, We announce a exciting Update about our prestigious project in collaboration with Naga Chaitanya and Venkat Prabhu. #NC22ActionBegins from tomorrow.” The makers also unveiled a stunning poster of Naga Chaitanya, which stunned and peaked everyone’s interest.

The poster was designed without revealing Naga Chaitanya’s appearance or look. Naga Chaitanya stands tall in the poster, with a few targets aimed on him. The poster’s red and black color palette instills a powerful vibe.

Srinivasaa Chitturi of Srinivasaa Silver Screen is bankrolling the yet-to-be-titled film. Pavan Kumar will be presenting this ambitious project. Many noted actors will feature in the movie, while popular technicians will take care of different crafts. Abburi Ravi has penned dialogues. The film’s regular shoot commences from Tomorrow. Other details will be revealed soon.