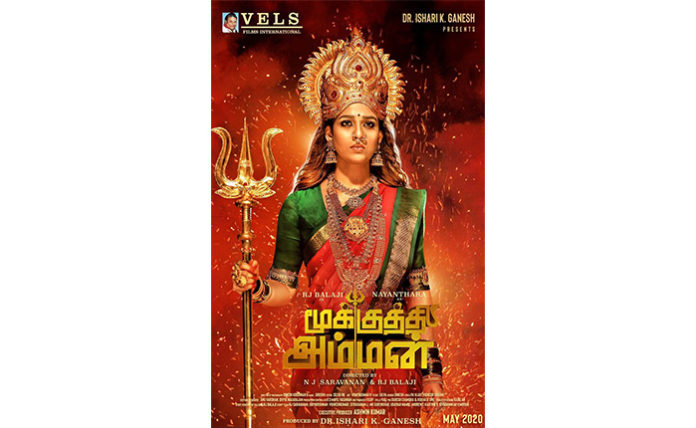 Star Heroine Nayanthara has agreed to play the title character of Mookuthi Amman in the direction of actor RJ Balaji in his directional debut and surprised everyone in the Tamil film industry. Today the makers of this satirical fantasy entertainer have released the first look poster of Mookuthi Amman online and featuring Nayanthara in a goddess avatar has clicked the right chords with the movie buffs.

Star Heroine Nayanthara with the crown, golden jewelry, Trishul in her hand and the natural charm in her face make her a perfect fit for the goddess role. RJ Balaji along with directing Mookuthi Amman along with N J Saravanan the RJ is playing the main lead in this movie. Mookuthi Amman’s first look poster is receiving a positive response and it’s been shared widely in social media platforms. Mookuthi Amman is produced in Vels Films International banner and it is slated for release in May 2020.