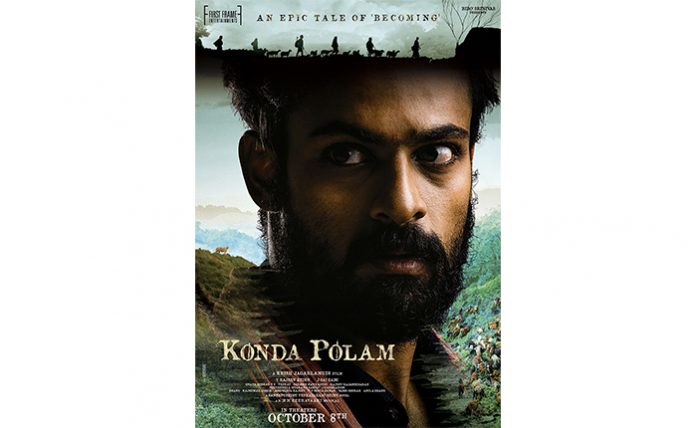 Mega sensation Vaisshnav Tej, creative director Krish Jagarlamudi, and stunning diva Rakul Preet Singh are working together for the first time for Production No 8 of First Frame Entertainments and the film is making enough noise already.

A small glimpse to make an announcement regarding the title and first look created inquisitiveness on the project. Titled Kondapolam, the film’s first look poster is out. It’s a perfect title for a film set in a forest backdrop and the title design looks absorbing.

Sporting a beard, Vaisshnav Tej looks very watchful and intense in the poster that presents him as a part of nature. While on top, few people are seen walking in the forest region, the background sees sheep eating grass. The intriguing poster hikes the prospects of the film.

Coming to the video, Vaisshnav Tej appears ferocious as he is set to take on miscreants in the forest. While visuals look grand, the background score builds up the emotion.

An Epic Tale Of ‘Becoming’ reads the poster. The makers have also announced officially that Kondapolam will release on October 8th.

Billed to be a spectacular adventurous film, adapted from the novel written by Sannapureddy Venkata Rami Reddy has a masterly technical team of MM Keeravani scoring the music, while Gnana Shekar VS cranks the camera.

Saibaba Jagarlamudi and Rajeev Reddy are producing the film presented by Bibo Srinivas. Kondapolam will also feature some prominent actors.