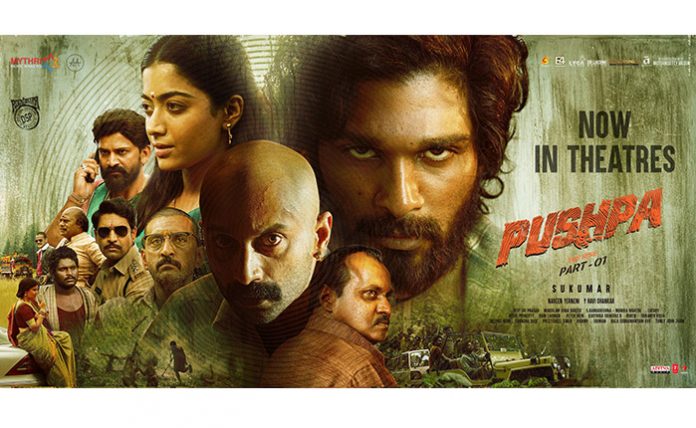 In the deep forests of Chittoor, A big smuggling syndicate smuggles red sanders. There are these groups that are doing business and making huge money. Pushpa (Allu Arjun) is a daily wage laborer who works for a group led by Konda Reddy (Ajay Ghosh) and his brothers Jolly Reddy (Dhananjaya) and Jagga Reddy. Pushpa with his fearless attitude rises against syndicate head Mangalam Seenu (Suneil) and emerges powerfully. Pushpa falls for Sri Valli (Rashmika Mandanna) and eventually, she too loves him. Then comes Bhanwar Singh Shekhawat (Fahadh Faasil) who is strict and can go to any extent to get hold of a criminal. Now will Pushpa manage to defeat Bhanwar also or will the latter prove that he is above all? This is something you need to watch on the big screen.

Pushpa is Allu Arjun’s show all the way. Allu Arjun undoubtedly has given his career-best performance. He is in a never-seen role and he aced it with perfection. Be it body language, slang, swag, or attitude… Allu Arjun has nailed Pushpa Raj’s role with utmost conviction. This is one of the rare makeovers we have seen for a commercial hero. His raw and rustic performance and look are something you will fall in love with.

Rashmika Mandanna has done a good job as a village belle who falls head over heels for Allu Arjun. She emotes well whenever it is necessary. Dhananjay, the Kannada actor has proved his mettle in the film as a womanizer and is definitely going to get good opportunities here. Sunil and Anasuya look menacing and their transformation for their roles in the film is worth appreciating. Fahadh Faasil, who comes last in the film is just a wow. Watching him on screen was a delight to the eye. The stage is all set for him to play a key role in the next part of Pushpa.

Director Sukumar deals with the entire first half without deviating from the core concept. Pushpa’s character established well with explaining the concept as well as elevating him at the same time. The second half showcases the rise of Pushpa to a syndicate head in an intriguing manner. Due to the lengthy run-time, there are some scenes that seem dragged. But, Sukumar never loses grip and the film focuses on its main crux. This is where Pushpa being a commercial film scores with its unique setup.

Camera Work is a delight to watch. Music By DSP grabs the attention & Gives soul to the script. Editing could have been better. The artwork is exceptional.

Production Values by Mythri Movie Makers are top-notch. Producers Complete Faith & Trust On “Sukumar” Has Paid Off Well With “Thagged le” Openings Which Is Followed By “Blockbuster” Reports Around The Globe. Transformation With His Looks & Next Level Performance Gains “Icon Star” The “Brand Image”. Making Skills Of Sukumar Turns “Pushpa” Into “Wild Fire”.