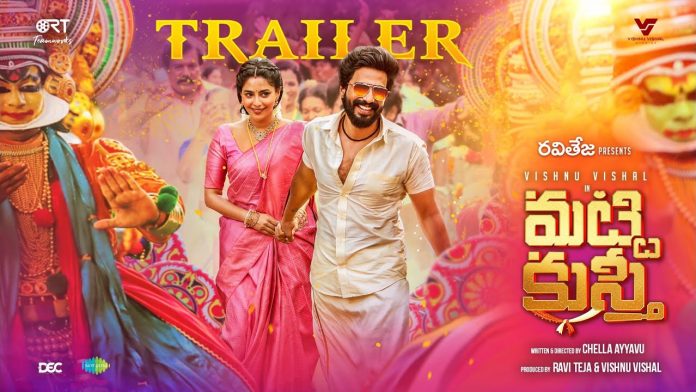 Talented hero Vishnu Vishal will next be seen in a sports drama Masthi Kusthi being directed by Chella Ayyavu. The actor himself is producing the movie, in association with Mass Maharaja Ravi Teja under Vishnu Vishal Studioz and RT Teamworks banners. Aishwarya Lekshmi is the heroine in the movie.

The film’s presenter Ravi Teja, and Rana Daggubati together launched the theatrical trailer of the movie. It seems the film is a complete package with drama, romance, amusement, and action. The trailer actually discloses the film’s plotline.

Vishnu is a kabaddi player who wants a submissive wife. On the other hand, Aishwarya Lekshmi is an aggressive girl who involves in unnecessary fights in the village. Since her parents are unable to find a perfect match, they pressurize her to act timid. The two get married, but ego clashes ensue between them, due to their aggressive natures.

The trailer looks promising and generates good inquisitiveness on the movie. Vishnu Vishal is remarkable in his character and he has performed some amazing stunts. Aishwarya Lekshmi astounds in an atypical character as an aggressive girl.

The film has music by Justin Prabhakaran, while Richard M Nathan is the cinematographer and Prasanna GK is the editor.

Matti Kusthi will be hitting the screens worldwide on December 2nd.