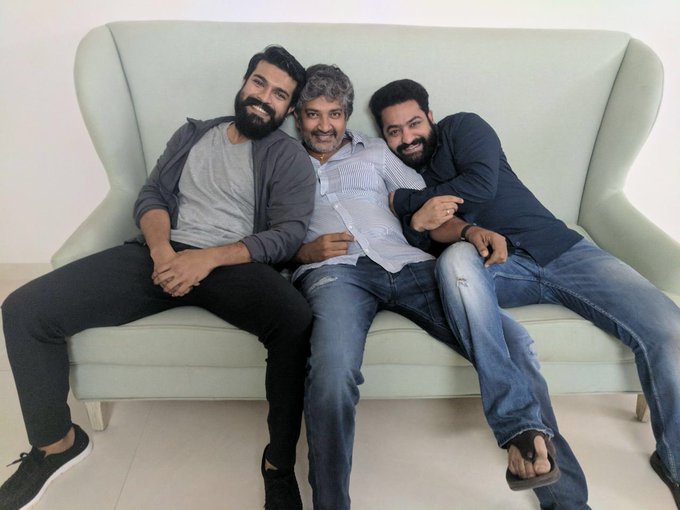 The D-day is here…. we are only a few hours away from witnessing India’s Biggest Film, Ace Director SS Rajamouli’s uncompromised vision, Two biggest stars NTR – Ram Charan joining hands for the first time for a Biggest Mullti-starrer after many decades….. RRR.

The World is eagerly waiting to witness the magic unfolding on the screen. Lets revise where it all started and how the journey went in making this Epic one last time before its release.

Since, The day it is announced that SS Rajamouli is making the film with Young Tiger NTR and Mega Power Star Ram Charan, expectations hit the roof and the hype got real.

The launch of RRR was a grand affair with Industry bigwigs attending the event on November 11, 2018

RRR starts rolling on November 19, 2020 and their initial plan was to release the film in the year 2020

After the launch, the first official press meet was held by the team to reveal more details, about the plot, actors, and release plans in other languages on 14 March 2019. In this press meet, SS Rajamouli announced the first release date of ‘RRR’ as July 30, 2020.

But, again in Jan 2020, The team announced the film will take some more time to get completed and announced a new release date as Jan 8, 2021

#RRR will hit the screens on January 8th, 2021! We know the wait is long but we promise to keep giving you updates in the meanwhile. #RRROnJan8th pic.twitter.com/yObn0Axl9J

Then the COVID Pandemic hit the world and the entire life standstill from March 2020 with a complete lockdown. The filming was resumed in October 2020 following the ease of COVID-19 lockdown in India. They even released a video of their shoot with We RRR Back

Then again in January SS Rajamouli took Twitter to announce the new release date as RRR will be coming to the theatres on October 13, 2021

Then the deadly second wave of COVID hits the world which took many lives and it makes life uncertain which makes the world come to a halt once again. More problems for RRR. Then after the second wave subsides slowly in June-July. SS Rajamouli starts the final schedule in August in Ukraine.

The much-anticipated film RRR once again pushed to further date citing delays in post-production works. Now the new release date is Jan 7, 2022. This time the team works full-throttle to meet the deadline and they are absolutely on their way to release the film for Sankranthi, 2022. The theatrical Trailer was also released in theatres with huge fanfare. The release of the trailer itself was a celebration.  The trailer was released on December 9, 2021 confirming the release date of RRR on Jan 7, 2022. As expected the trailer is explosive and raised the expectations bar sky high.

When everything is going as per plan with humongous promotions all over India, COVID once again played the villain for RRR. The third wave came and so are the restrictions to close movie theatres in several states. So, the team has no choice to push the release date from Jan 7, 2022.

After many postponements, setbacks, braving three waves of COVID, RRR has finally announced its release date as March 25, 2020.

The team has toured the entire country and even went to Dubai for promoting the film, RRR team leaves no stone unturned while promoting their film aggressively. Their hard work is now showing the hype and frenzy the film has which reflects in box-office numbers. The film is setting the cash registers on fire with advance bookings itself.

Finally, the d-day is here, Brace Yourself for India’s Biggest Film with Biggest Stars in Biggest Director’s Film…