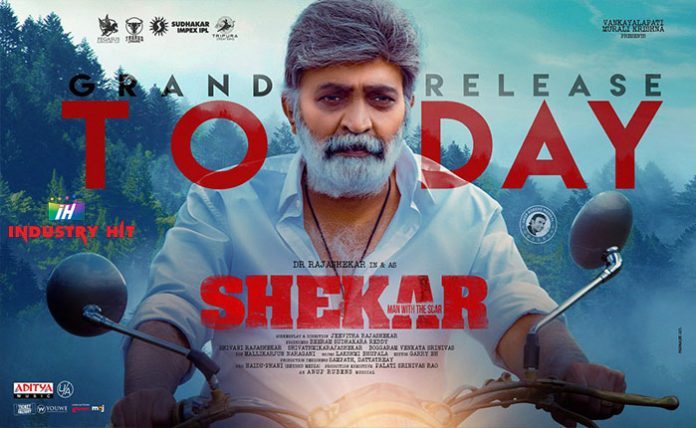 What does Angry Star Rajasekhar have in common with his contemporary Telugu actors? The answer is certainly his craft and his chequered on-screen performances in Tollywood. His new film ‘Shekar’ released at the box-office this Friday. Largely drawn from the Malayalam original ‘Joseph’, the Telugu version is a story of a retired policeman, who has a battered past, a scar that keeps haunting him. His broken marital life pushes him into more sadness. As a lovely doting father, Shekar feels regret of not fulfilling the wishes of his daughter Geetha Shekar as she is raised under single parents and occasionally visits her mother. Probably, because of his solitude, Shekar takes his job seriously in the police department. Gradually earns a name. For every unsolved crime mystery, superiors rely on Shekar’s squint thinking and intelligence. The tragic day changes his life to its entirety. His deserted wife passed away following a road accident. In a very short span, his daughter Geetha too succumbs to her injuries in the similar accident that her mother had faced. The reason behind these deaths was no accident. As Shekar tries to investigate more deeply, he unearths a big scandal in the medical field. A million dollar scam is untraced right under the nose of government authorities. How Shekar would crack it – is the full story.

Dr. Rajasekhar’s charisma and style has not been dented by his age. You could feel the young Rajasekhar during ’90s when the actor transforms to his younger version in the film. After his blockbuster hit ‘Garudavega’, his new release ‘Shekar’ is another resounding success in his career. ‘Shekar’ has been projected as a family film ever since the promotion activity was launched. His daughter Shivani Rajasekhar played the limited on-screen role, but gave her best to it.

Jeevitha Rajasekhar keeps the soul of original intact and made emotional quotient work perfectly. Though the love track and songs didn’t create much impact, the conflict of Shekar’s character has been showcased very well. The investigation scenes in second half are good with interesting detailing. The climax is well shot and the way hero’s character ends is impressive.

Another highlight of the film is its background score. But ‘Shekar’ fulfilled & Succeeded in terms of making, short division and the flavour compared to Malayalam film. Jeevitha handles brilliantly well as a director. Production values of the film are top-notch. Camerawork and Editing are neat.