Like every year, SuperStar Mahesh Babu‘s Birthday was celebrated in a grand manner this year too. On August 9th, Social Media is flooded with wishes from celebrities of all quarters and fans from all over the world. Apart from doing charity works, providing food at orphanages, old age homes, planting saplings, and cutting birthday cakes fans celebrated their favorite but SUPERSTAR’s Birthday in many innovative ways. Makers of Mahesh’s latest films ‘Sarkaru Vaari Paata’ and ‘SSMB28’ surprised everyone by revealing updates about those films.

Blasting ‘ Birthday Blaster’ Of ‘Sarkaru Vaari Paata’ Is Out !!

The Blaster looks kick-ass and mind-blowing skyrocketing the hype around the film. Mahesh Babu appears at stylish best. The styling is amazing as he is seen sporting a tiny round earring, long hair, and a one-rupee coin tattoo behind his ear. The Superstar is super cool here in a trendy outfit. The punch dialogue and action choreography made it whistle-worthy. The styling, the location, the luxury car, the Superstar swag are unmissably glorious. His rugged and massy make-over makes fans drooling especially female fans. This is evident with Keerthy Suresh’s tweet asking Namratha, “Sir Padukune mundu prathi roju Dishti Teeyandi…”

The Blaster once again confirms the movie for January 13th, 2022 as Sankranthi Special. It looks like a perfect film for the Sankranthi festival.

Sarkaru Vaari Paata Blaster Is Tollywood’s Most Watched Teaser In The First 24 Hours Of Release !!

The Blaster of Superstar Mahesh Babu’s highly-anticipated Sarkaru Vaari Paata looks kick-ass and mind-blowing skyrocketing the hype around the film. It has struck a chord with the fans and common audience alike and as a result, it has emerged as the Telugu film industry’s most-watched teasers in the first 24 hours of its release.

The teaser has recorded 25.7 million views and over 754K Likes in 24 hours and is ranked first by a huge margin in the list of Tollywood’s most-watched teasers. Blaster is receiving blasting responses from overseas too which is a stronghold for Mahesh. The teaser is cruising ahead more than 31 Million views and is standing tall. 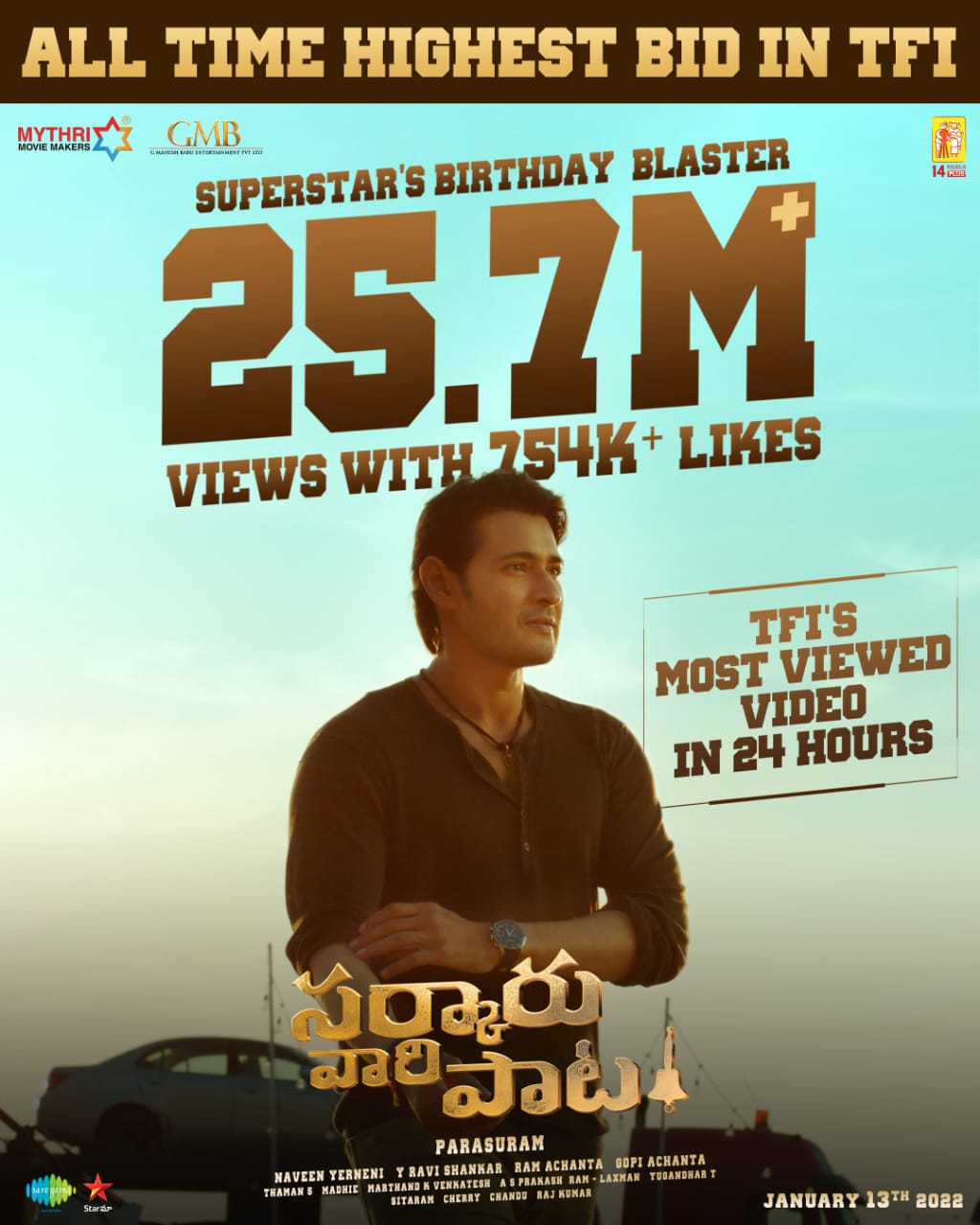 The Ensemble Cast & Crew Details Of #SSMB28 Are Out !!

National award-winning editor Navin Nooli will be editing the film and renowned Art Director A.S Prakash is all set to join hands with Trivikram again in this movie. Cinematography will be led by the magical Lensman Madhie.

Sensational music director Thaman S will be composing the music for this movie. The ravishing diva Pooja Hegde will play the female lead. Pre-production is set to work at a fast pace & the Movie is scheduled to go on sets soon.

This Hungama around the Superstar Mahesh’s Birthday and ‘Sarkaru Vaari Paata’ has also caught Twitter’s attention. Twitter has archived all the wishes of the celebs into a list and featured it on Twitter Moments India – the official handle of Twitter which features the best of what’s happening on Twitter in an instant.

That’s not all, Mahesh Babu-related hashtags #KeerthySuresh, #SarkaruVaariPaata, #SSMB28, #HBDMaheshBabu are on the Twitter trends list indicating the Superstar’s mania. 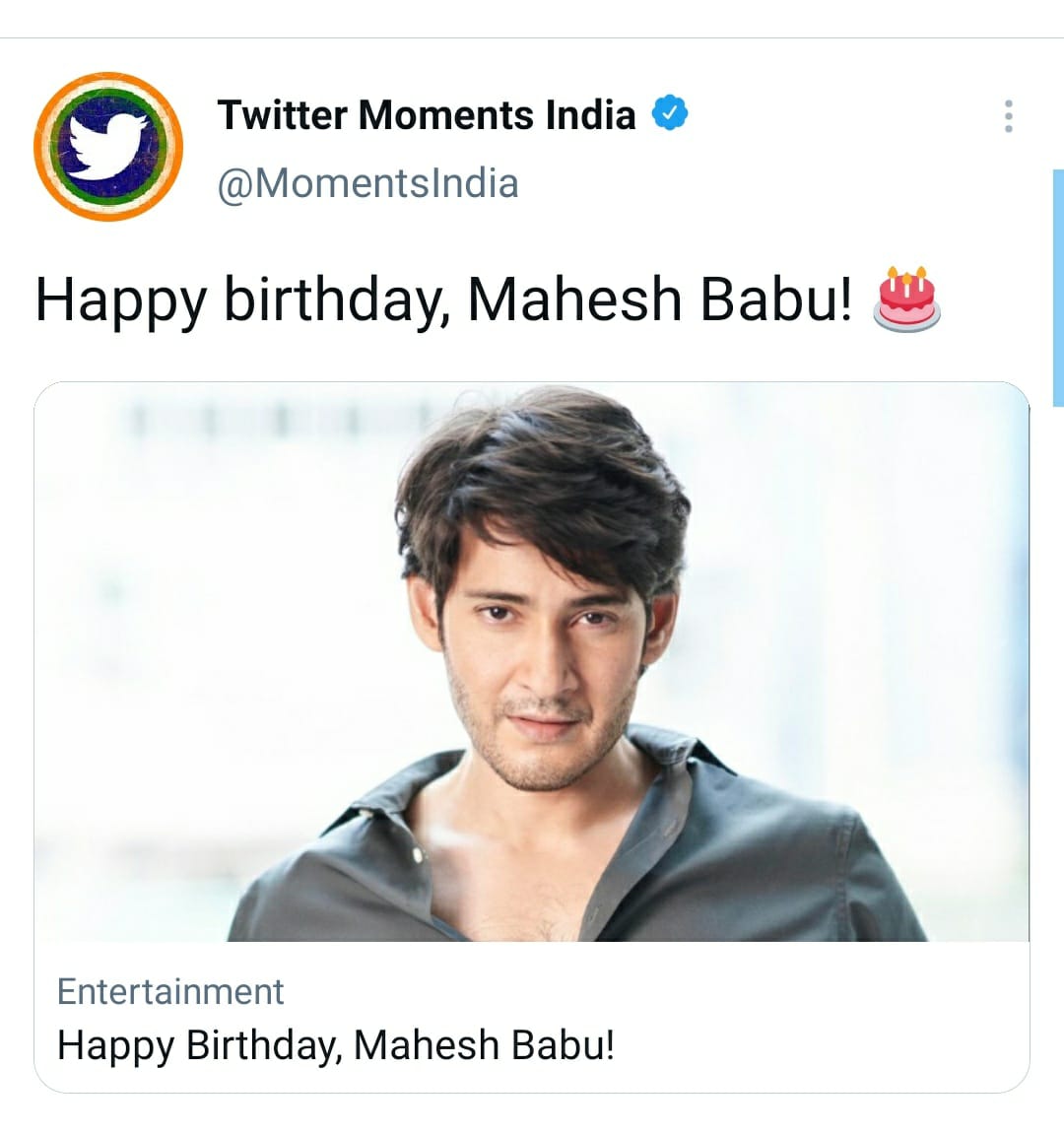 Fans Spread Happiness With Charity Programmes On The Occasion Of SuperStar Mahesh’s Birthday !!

Superstar Mahesh Fans have organized a Birthday Space on Twitter with many top Tollywood celebrities. It turned out to be one of India’s biggest spaces also Top 1 space in Tollywood. The space became a huge success setting a new trend in Tollywood. The icing on the cake is SuperStar Mahesh joined space for some time and thanked fans, celebrities, and everyone for their love and wishes.

This Year’s Birthday of SuperStar Mahesh has literally turned out to be a Super Celebration for Fans with a Terrific Teaser and exciting update about ‘SSMB 28’ followed by a trend-setting space. 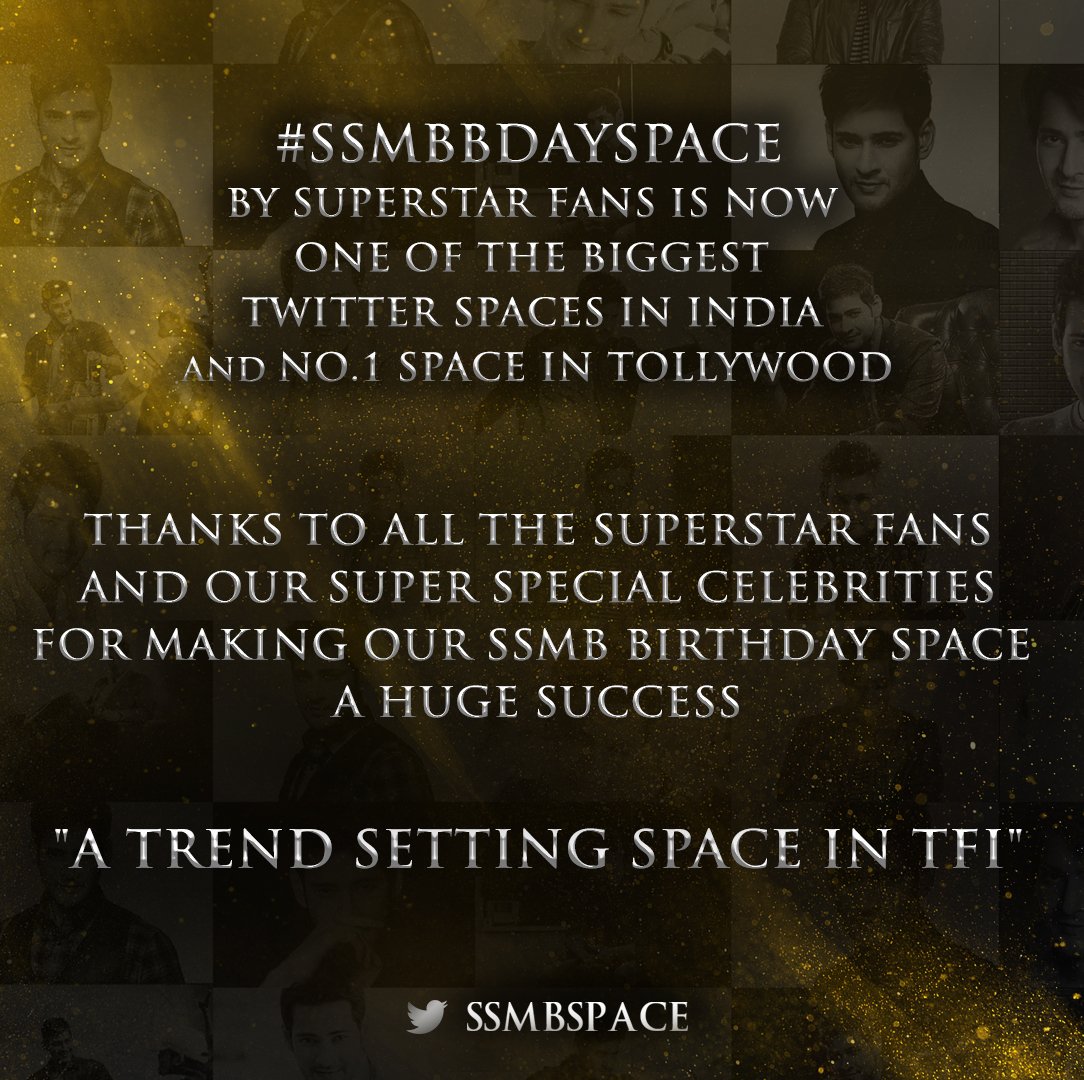