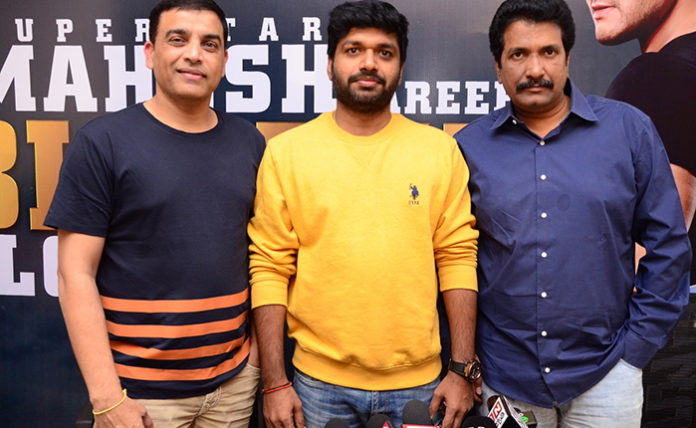 Superstar Mahesh‘s latest outing, Out & Out Mass Entertainer ‘Sarileru Neekevvaru’ Presented by Dil Raju under Sri Venkateswara Creations Produced by RamaBrahmam Sunkara under AMB Entertainment and AK Entertainments banners under Young Talented Director Anil Ravipudi. Rashmika Mandanna played as heroine while Lady Amitabh Vijayashanthi is seen in a powerful role. The Mass Entertainer ‘Sarileru Neekevvaru’ which was released worldwide as a Sankranthi Gift is cruising ahead with record-breaking collections emerging as Superstar Mahesh’s career biggest hit. On this occasion, makers interacted with media…

I Haven’t Seen Sankranthi Like This Never Before !!
Super Producer Dil Raju said, ” I came to industry 22 years ago. I haven’t seen Sankranthi like this in my experience. SuperStar Mahesh and Anil Ravipudi have completed this film within five months. The audience also made this Blockbuster Ka Baap and created a huge revenue for Distributors and Exhibitors this Sankranthi. Anil has done five films so far. He has given career-best for five heroes with his films. He also gave the highest revenue film for AK Entertainments and for our banner. We can’t say where the film ends at the box-office. Distributors are already in profits. Being such a huge star, Mahesh Babu Garu has completed this film in five months. Thanks to Mahesh Babu Garu. Thanks to the audience for giving such a huge revenue for this Sankranthi.”

One Of The Biggest Achievements Of Anil Ravipudi
Popular Producer Anil Sunkara said, ” Sankranthi festival is over. But, the festival is still going on for Sankranthi Films. ‘Sarileru Neekevvaru’ stands as the biggest hit in Superstar Mahesh gari career. Scoring a biggest hit in Superstar’s career is not a small thing. This is one of the biggest achievements of Anil Ravipudi. This is the result of Anil’s sheer hard work. I can’t forget Dil Raju’s gari co-operation for this film. The film is collecting beyond our expectations. Distributors are very happy that this is the best Sankranthi they had in Tollywood. We are lucky that our film is a part of this Sankranthi.”

Sankranthi Box-Office Daddarillipotondi
Young Talent Director Anil Ravipudi said, ” Telugu cinema is shining. The box-office has witnessed huge revenue for this Sankranthi. Ee Sankranthiki Box-Office Daddarillipotondi. I am very happy. Thanks to the audience for making ‘Sarileru Neekevvaru’ such a huge hit and made it as Superstar Mahesh gari career biggest hit. The film still has two, three weeks run. We are adding one and a half minute additional scene for those who are watching the film repeatedly. It will bring bonus laughs. ‘Ramana Load Ettaalira…’ Dialogue has received tremendous response. We are also saying ‘Ramanaa Box Office Load Etthalira’. Thanks to the audience for loving and making ‘Sarileru Neekevvaru’ a massive success.