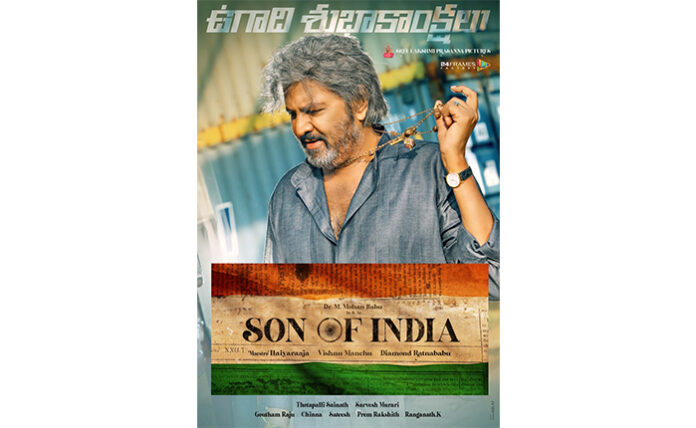 A history filled with boisterous sensation is about to repeat itself once again. with innumerable blockbusters to his credit in the past, Collection King Dr. Mohan Babu is all set to delight the world of the audience world over with a unique character around which the thread of the entire story gracefully revolves. Being helmed by Vishnu Manchu on his banner 24 Frames, Son of India is said to be on a never- before story base that suits the legendary status of Dr. Mohan Babu. It is always a point of endless curiosity as to what interested an inimitable actor like Dr. Mohan Babu who never compromises in the context of the story or his character to hook to this storyline which is grandly described in the circles amongst the film industry as the most covetous content for a hero of such highest order. With many a detail is yet to be revealed, Vishnu Manchu has stunned the world of cinema all around by releasing a dazzling poster of the veteran hero, Dr. Mohan Babu in Son of India on the eve of the auspicious festival Ugadi, today. As the poster hit the attention of one and all, the expectations on the film have suddenly risen sky-high. The reason might be very simple since the competent performer can just multiply the hidden dimensions of the character that he portrays with a certain degree of challenge every time. The unit of 24 frames is engaged in proudly whispering the highlights of the film, the salient features are obviously the signatures of the giant actor, Dr. Mohan Babu. Dialogues, power-packed performance, action episodes…what all that is expected of a peerless actor like him. Of course, there are many more captivating highlights that will in the coming days see the light is bound to lift the audience, in particular, the wide base of fanfare that was hanging to his image with love and admiration to an unprecedented theatrical experience. For now, the poster with Dr. Mohan Babu in a very engrossing mood has left the viewers in unimaginable awe and appreciation for him.