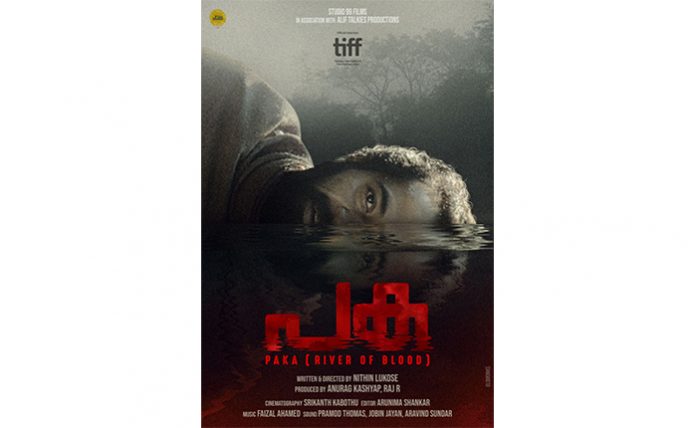 The producers of the acclaimed Telugu film Mallesham are back with another interesting feature film titled Paka – The River of Blood. Paka is a Malayalam language feature film directed by Nithin Lukose, who was the sound designer for Mallesham.
Produced by Anurag Kashyap and Raj Rachakonda, PAKA is a tale of a river that swells with the blood of two feuding families and a young couple that tries to overcome this hatred with their love.
The film set in Wayanad of North Kerala features an ensemble cast including, Basil Paulose (Johnny), Vinitha Koshy (Anna), Jose Kizhakkan (Kochappan), Athul John (Paachi), Nithin George (Joey), Joseph Magickal (Varkey) and is shot by Srikanth Kabothu, edited by Arunima Shankar, music by Faizal Ahamed and Venkat Siddareddy is the Creative Producer of the film
The film won the best WIP project in the Work-in-Progress Lab of NFDC Film Bazaar 2020 and is produced by Studio 99 Films in association with Alif Talkies Productions.
This film is Nithin Lukose’s debut feature as a director and is to have its World Premiere at the 46th edition of the Toronto International Film Festival (TIFF), held from September 9-18 2021.
The film is selected to be in the Discovery section, which showcases the first or second feature films of directors worldwide. TIFF will be held in a hybrid way, with both in-person and digital screenings.