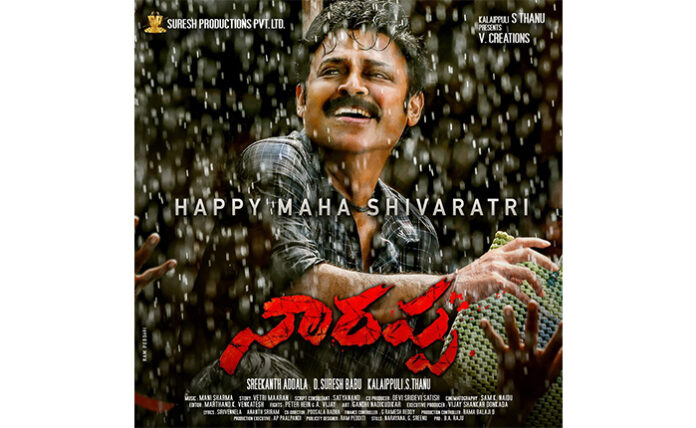 Suresh Productions Pvt Ltd and V Creations banners joint Production is ‘Narappa’ starring Venkatesh who has made ‘Victory’ as his household name in Sreekanth Addala’s Direction who is known for making Herat touching feel-good films. Star Producer Suresh Babu and Kalaippuli S Thanu are jointly Producing this big budgeted film. National Award Winning Actress who always chooses different roles, Priyamani is playing the role of Sundaramma, wife of Narappa in this film. Her role will be remembered for a long time by the Telugu audience. First Glimpse and Posters released so far have garnered terrific buzz about the film. The teaser which was released on the occasion of Victory Venkatesh’s Birthday received a rave response from all corners. The film has completed its shooting part already and is currently undergoing its post-production works. Makers released a special poster on the auspicious day of Maha Shivaratri. The posters which were released so far features Victory Venkatesh in a fiery old getup. The latest poster surprises everyone which has Venkatesh’s young look and is getting a very good response. ‘Narappa’ is being made with family emotions as the main highlight is getting ready to release as a Summer Special.