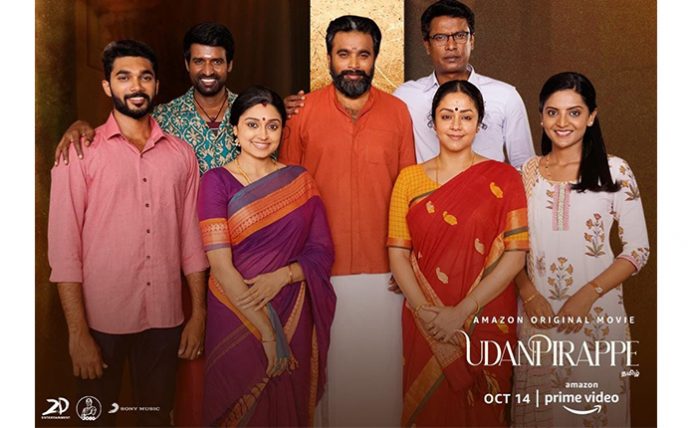 Written and Directed by Era Saravannan

Starring Jyothika, Sasikumar, and Samuthirakani in lead roles, Udanpirappe is directed by Era Saravanan and produced by Jyothika & Suriya under their home banner 2D Entertainments. This film skipped theatrical release and is directly streaming on Amazon Prime Video from today.

Vairavan’s (Sasikumar) sister Maathangi (Jyothika) and husband Sargunam (Samuthirakani) have not been on talking terms with him for decades. An accident that happened in the village led to the death of Maathangi’s son. Sargunam believes that Vairavan was the reason for it and hasn’t been talking to his brother-in-law since then. But the entire village knows what the truth is. Vairavan, being the head of the village, is someone who goes against all the odds to fight for the good of the village and the people. At the same time, there’s a businessman’s son who is the antagonist in the film and does a lot of things in the village for his benefit and pretends to be good. One day, a goon attacks Maathangi’s daughter Keerthi and stabs her. While Sargunam again thinks that people who want to take revenge on Vairavan have tried to kill her daughter, the truth is something else. How is Sargunam involved in this, and what does Maathango do to get back to talking terms with her brother forms the crux of the story.

This film marks Jyothika’s 50th film. As usual, her screen presence and charm will make you fall in love with her. She got into the skin of Maathangi and has done a great job. She plays the mother of a girl who is going to get married soon and she carried that elderliness really well. Her makeup and outfits are cherries on the cake. Her expressions in different scenes are worth appreciating. Sasikumar, as the head of the village, has fit well into the role. He has done justice to the character given to him. On the other hand, Samuthikarani plays someone who follows a rule book and has his own manifesto. He doesn’t tolerate anyone who does anything against the system and believes that only the police and the government can do justice to people. As someone who is a little cold-hearted, he has done a great job on screen. He is a great pair to Jyothika on screen. Kalaiyarasan plays the antagonist in the film. Though he doesn’t have much to do in the plot, there are some twists and turns that happen because of him. Comedian Soori is also part of the film and he manages to make us laugh here and there with some good dose of humor.

· Performances of the lead actors

Director Saravanan has made a good film. It talks about relationships, ethics, the importance of values, and the bond between the siblings. It could have been better if the film was crisp enough to watch. There’s some lag here and there and the director could have avoided it with a good screenplay. Music is composed by D. Imman intensifies the film. The locations, camera work, and other artists in the film are good enough. Scenes involving family drama are arresting. There are songs everywhere in the background and there are no actual songs like the audiences expect. It would have been better if the director chose to show the bond of a sister and her brother in a much better way.