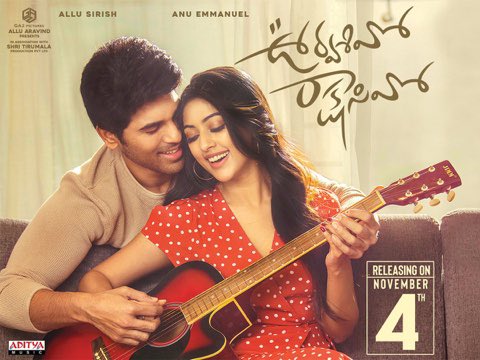 Sree Kumar (Allu Sirish) falls in love with Sindhuja (Anu Emmanuel). As they are colleagues, friendship brews between them. After making out one night, Sree proposes his love but Sindhu says marriage is not her thing. After knowing the pain of reduction and love of Sree for her, she too loves him but she didn’t want to marry him. She says she is okay with live in relationship. The rest of the story is about how Sree manages live-in relationship and conservative family at the same time. What happens finally form a the story.

Performances:
Allu Sirish surprises with his matured act. His role needs to portray emotions and comedy throughout the film. He did well with ease. This is definitely one of his best in his career. He is showing very good improvement from film to film.

Anu Emmanuel didn’t he role of modern girl and she is attractive with her good looks and glamour. She did very well in her complex role. Among others, Aamani, Sunil and Vennela Kishore will be remembered for their roles and performances.

Drawbacks:
Excess dosage of adult content
Second Half gets predictable at times

Analysis:
Director Rakesh Sashii comes up with an interesting conflict point which deals about marriage and live in relationship. This core point is dealt with love story family emotions, comedy. The first half is breezy with office romance and entertainment. The film proceeds in an enjoyable manner with ample doses of comedy.

The second half tries to induce more comedy and emotions into the story. It got succeeded to a major extent. But, after a point the story seems predictable and gets repetitive. But, with good dialogues and comedy it manages to maintain the interest. Though the pre-climax is off-guard, a well made climax covers it all giving a happy ending.

Music by Achu is good and BGM especially in the first half is very good. Cinematography is cool and visuals are topnotch. Production values are good and it is evident on the screen. The film looks rich in quality.