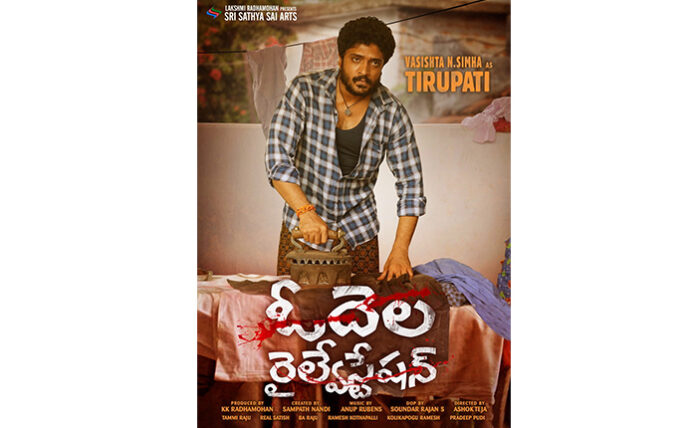 Different crime thriller titled ‘Odela RailwayStation’ which is Presented by Smt Lakshmi Radhamohan and bankrolled by Hit films producer KK RadhaMohan in Sri Sathya Sai Arts banner. Popular Director Sampath Nandi is providing Story, Screenplay, and Dialogues for this film. Ashok Teja is debuting as a Director with this film.

Vasishta Simha who played as a Hero in Superhit Kannada films Dayavittu Gamanisi, 8 MM Bullet, India vs England, Mayabazar 2016, and acted in 25 Kannada films is getting introduced as a Hero in Telugu with ‘Odela RailwayStation’. Heroine Hebah Patel is seen in a different role as a rural girl ‘Radha’. Her recently released look garners a superb response. This film is a different crime thriller which is based on incidents that happened in a village named ‘Odela’. ‘Odela RailwayStation’ is being made with a realistic approach without any makeup, different costumes, dream sequences, and songs. Hero Vasishta Simha’s look in the role of ‘Tirupati’ is unveiled today by the makers. He will be seen as a simple man with a soft soul and helping hands. On this occasion…

Producer K.K. RadhaMohan said, ” We unveiled the look of Hero Vasishta Simha from ‘Odela Railway station’ today. He will be seen in the role of ‘Tirupati’, a soft guy with helping nature in the film. The entire shooting part has been completed. The film is currently undergoing its post-production works.”

Hero Vasishta Simha said, ” I am very glad of getting introduced in Telugu with a special film like ‘Odela Railway station’ in RadhaMohan gari banner, created by Sampath Nandi Garu Directed by Ashok Teja. I will be seen as a village guy ‘Tirupati’ in the film. This film will become a very good turning point for my career. ‘Odela Railway station’ which is made with a realistic approach will surely become a big hit.”