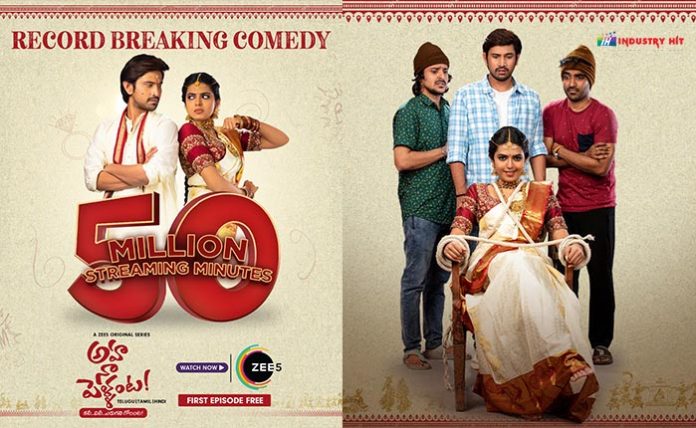 Hyderabad, November 25th, 2022: ZEE5’s Original ‘Aha Naa Pellanta’ is a romantic comedy entertainer which started streaming on November 17. A young man faces the biggest crisis of his life just when he is about to tie the knot. The bride elopes with her boyfriend. How the groom mounts revenge is what the Sanjeev Reddy-directed web series is all about.

The web series has successfully clocked 50 million viewing minutes. Even before its release, ‘Aha Na Pellanta’ featured on the IMDb Top 10 India chart as the most-anticipated web series.

The Telugu-language rom-com has also been promoted heavily across languages. The all-around appreciation goes to show that the content is very strong.

By clocking 50 million viewing minutes in a short period of time, ‘Aha Na Pellanta’ has become a record-setting comedy series. The reviews have been unanimously positive and the response from the audience has been staggering. The chemistry between Shivani Rajasekhar and Raj Tarun has also been mentioned as a key highlight.

Besides the sparkling chemistry between the lead pair, the web series also boasts of clean comedy. The romance, about which there is nothing physical, is clean and can be watched by the entire family.

If you wish to enjoy your weekend with your family, catch ‘Aha Na Pellanta’.