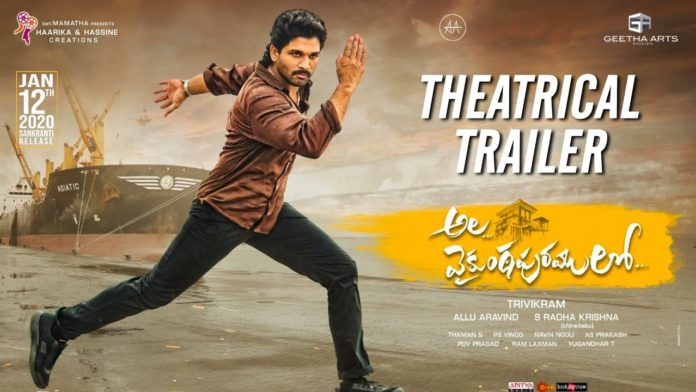 Out of the blue Stylish Star, Allu Arjun AA19 movie team has announced that Ala Vaikunthapurramloo trailer will be released and within a short notice, everyone at the AVPL music event got excited. Director Trivikram Srinivas trademark punch dialogues in the typical Allu Arjun voice modulation has done the trick again in the Ala Vaikunthapurramloo trailer released today.

Ala Vaikunthapurramloo trailer started on a comic note introducing the family of Allu Arjun and showcasing the middle-class life of the hero adding more impact is with the acting of the Murali Sharma a typical father. Then the quick introduction of the Tabu family members is shown followed by an action part. Pooja Hegde is looking prettier than ever and the chemistry between the lead pair looks adorable. Post one end half-minute the real mass angle is presented by the director. The last few seconds of the trailer where Allu Arjun describe the commercial entry of the hero added more fun to the proceedings giving a final last hit hint of AA19.

Music director S.S.Thaman background score in the trailer has elevated the scenes and cinematography P.S.Vinod made every frame look fresh. Rich production values of both the banners can be sensed in every frame of the Ala Vaikunthapurramloo trailer. Overall the trailer of AA19 ensures that Allu Arjun and Trivikram Srinivas are going to score a hat trick at the box office on 12th January 2020.