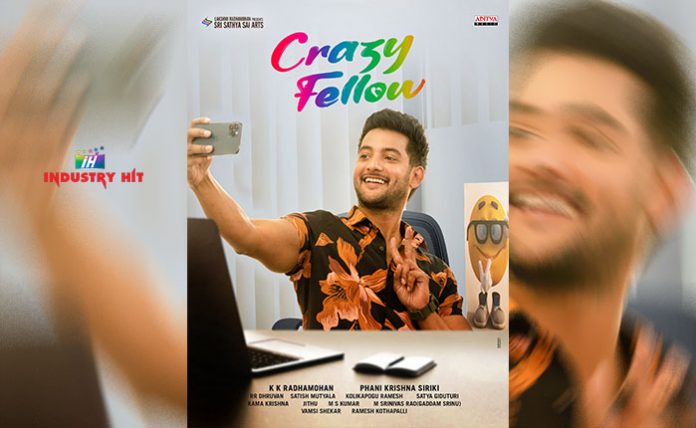 Abhiram (Aadi Sai Kumar) is a happy-go-lucky guy born with a silver spoon. Abhi lives life king-size and is known for his crazy behavior. He decides to use a dating app as he feels that no girl would like him for his crazy acts. His brother (Srikanth Iyengar) helps him bag a job at a software firm. From day one, he has had issues with a colleague Madhu (Digangana Suryavanshi). Abhi and Madhu interact with each other through a dating app without knowing each other’s true identities. When they finally plan to meet, they get an unexpected shock. Who is behind all these? To find out more about this watch Crazy Fellow on the big screen

Crazy Fellow is undoubtedly Aadi Saikumar’s recent best in all aspects. Be it his looks, comic timing, and screen presence, Aadi is at ease, enjoying himself doing the role of Abhiram. Whenever the actor enjoys doing his role the outcome is always a treat to watch. He emoted well in the emotional scenes, excelled in romantic sequences, and surprised everyone with his comic timing. Aadi Sai Kumar has tried something different and entertained the audience in the lead role with his crazy acts.  He elevated the scenes with his hilarious antics

Digangana Suryavanshi looked good onscreen. She performed well and displayed good emotions and expressions. Whereas Mirnaa Menon on her debut appeared only ahead of the interval and she got a good screen presence. Bot Digangana and Mirnaa Menon bring an earthiness to their portrayal and possess a girl-next-door charm. Srikanth Iyengar played his role effectively while Saptagiri did well. Narra Srinu, Vinodhini Vaidyanathan are a riot and it’s their satirical response to the protagonist’s actions. Others played their part accordingly.

Crazy Fellow, directed by debutant Phani Krishna Siriki, is driven by a comedy-of-errors screenplay and the hilarious writing keeps you invested in the story. Initially, the film is very interesting, but as the film progresses they become routine at times. But, The first half ends with an interesting twist setting the stage for the second half. The second half is all about mistaken identity and the problems arising out of it.

Writer-director Phani Krishna displays a good knack for comedy even in the most unexpected situations. Crazy Fellow is driven by apt casting, and neat performances – the boundaries of the characters are well-defined with actors doing justice to their roles accordingly. With a wafer-thin story, Crazy Fellow manages to entertain with hilarious situations.

Dhruvan’s music is good and he tuned a couple of melodious songs. All the songs are well-shot. His background music is good. Satish Muthyala’s cinematography captured beautiful visuals. Editing by Satya Giduturi is okay. Dialogues are hilarious and spontaneous. Production values by Producer KK Radhamohan are good. He deserves a special mention for believing in this youthful crazy story and delivering a quality output.