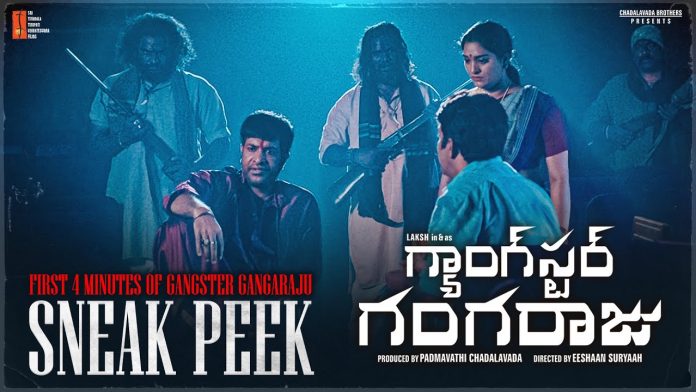 Promising hero Laksh is all set to enthral as Gangster Gangaraju. The film directed by the very talented Eeshaan Suryaah, produced prestigiously by ‘Sri Tirumala Tirupati Venkateswara Films’ and presented by ‘Chadalavada Brothers’ has completed all the formalities and is up for release on 24th of this month.

The team has been promoting the movie aggressively, since they are very confident about the outcome. In fact, the film’s theatrical trailer has set the bar high on the movie. Elated with the response and also to lure the movie buffs, they have dropped a sneak peek video.

The 4:20 minutes long video is more or less backstory of the movie. Srikanth Iyenger who became an ex-MLA, because of a new Gangster Gangaraju hires a Bihari gangster Bachchan Thakur to take a revenge. In the process, he narrates the story of his rise and fall. While it’s his heroics which made him a ruthless gangster, Gangaraju is the reason for his fall.

The video gives all the rise to the new Gangster Gangaraju. Laksh impresses big time in the titular role. The team is opting for unique promotions and this is helping the movie to make enough sound, before the release.

Vedika Dutt is the lead actress, wherein Charan Deep will be seen as the antagonist. Kanna PC cranked the camera, wherein Sai Kartheek has provided soundtracks and background score.

Being made with a different screenplay, ‘Gangster Gangaraju’ will have all the thrilling elements for movie buffs.