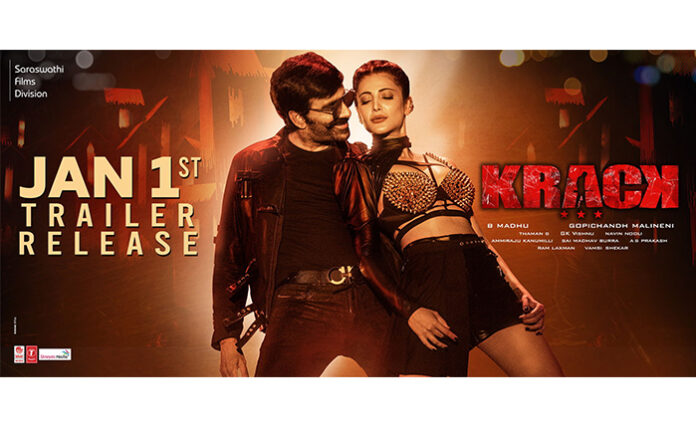 Mass Maharaj Ravi Teja and blockbuster director Gopichand Malineni’s upcoming film Krack has wrapped up its entire shooting part including songs. The film is gearing up for release on January 14th for Sankranthi.

In the announcement poster, Ravi Teja looks macho in black dress sporting shades, while Shruti Haasan looks ultra-glamorous in a glitzy costume. They set the screens on fire with their rocking chemistry here.

S Thaman has scored music for the film and all the three songs released so far by the makers enthused music lovers. To intensify the promotions, Krack’s theatrical trailer will be released on January 1st as New Year presentation to Ravi Teja fans and cine goers.

Based on true incidents in Telugu states, Krack marks third reunion of Ravi Teja and Gopichand Malineni. It’s an intense story and will have elements for all sections. Apsara Rani will be seen shaking her leg opposite Ravi Teja in the special song Bhoom Bhaddhal.

S Thaman has rendered soundtracks while GK Vishnu who worked for films like Mersal and Bigil is the director of photography.