Ismart beauty Nabha Natesh has become the most wanted heroine in Telugu film industry and she has a handful of movies in her kitty that are going to get released next year.

She has turned a year older today and instead of enjoying her 24th birthday Nabha is working for her flick with Bellamkonda Sai Srinivas in Hyderabad showing her work dedication that made her first choice for filmmakers.

On the occasion of Nabha Natesh’s birthday, the makers of her upcoming movie Disco Raja have unveiled a poster of her along with revealing her first glimpse from the science fiction thriller directed by VI Anand.

Nabha Natesh is showcased in a wet sari where she is enjoying the rain to the core in a dancing mode and with God Krishna in the background hinting a bit about her character in Disco Raja film. The wet sari treat my birthday hot heroine is going viral in the social media platform from the moment it’s released online by SRT Entertainment production house. 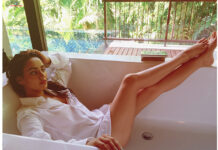 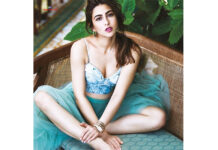