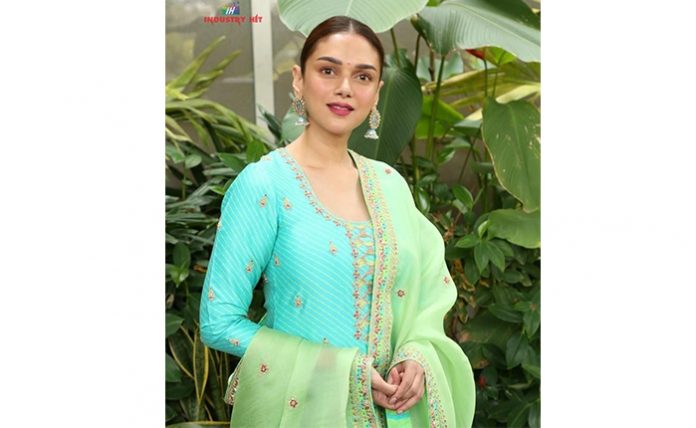 Gorgeous Aditi Rao Hydari who is known for her talent too is playing one of the lead roles in the upcoming ‘Mahasamudram’ along with Sharwanand and Siddharth. Ajay Bhupathi is the Director and Anil Sunkara is the producer. The film is gearing up to release on oct 15th as Dussehra Special. On this occasion, Shiva Kumar B from IndustryHit.com interacted with Aditi Rao Hydari. Read on for interesting things about the film in her own words…

Tell us about your character in ‘MahaSamudram’?

– I play the role of ‘Maha’ in ‘MahaSamudram’. Maha is a sweet, bubbly, honest, and hardworking girl. She is very transparent. She doesn’t hide anything. The character grows with the film. I like playing ‘Maha’.

What is your immediate reaction after listening to the script?

– I loved it instantly. I really like Ajay Bhupathi’s work. I saw his RX100 even before he narrated this script and I loved it. I liked His command over emotion, drama. He is the kind of Director who celebrate cinema, Hero, heroines. At the same time, his storytelling is strong. It was Ajay Garu who is the main reason to do this film. His narration, passion, and conviction impressed me. He narrated this story two years ago and many things changed since then. But, he keeps on telling me that he will do this film with me only. I feel I am blessed.

How do you define the caption of the movie?

– I love the caption of the movie ‘Immeasurable Love’. I love love stories. When Ajay Garu said that it’s a love story, I was very happy. Love is powerful, Everything can be correct if there is love. ‘Immeasurable Love’ is apt for this. ‘Mahasamudram’ is about Maha Love.

Tell us something about the technical values of the film?

– Ajay Garu is the captain of the ship. The director will bring the team together. Ajay Garu has a very strong understanding of the film. He was the student of RGV Garu and a fan of Maniratnam Garu. Raj Thota gari’s cinematography is so beautiful. Chaitan Bharadwaj’s melodies are very beautiful. We shot on live locations. It was very hot and I was shooting barefoot for most of the time. Everybody has given their best.

What was the preparation for Telugu dialogues?

– I was born here in Hyderabad but I was brought up in the North. I don’t speak Telugu. What I learned was I should know my dialogues properly. I learn my dialogues before coming to the set. Raghu Garu and Kalyan Garu helped me with my lines.

Any workshops have you done for this film?

– No. Ajay Garu doesn’t want any preparation. He just wants us to come to sets and do it. I enjoy doing it this way. The emotion is fresh and real.

What is the learning experience for this film?

– I learned how to dance on slippery rocks (laughs). But, seriously It was really tough. I learned from Mani sir that it is very important to trust and respect the director and the people I am working with. I spent 50 days on sets. Every day you should learn something and every day you should be happy and make people around you happy. When you work like that. That’s when everyone’s blessings will work for the film.

Any plans to direct films in the future?

– I’m always happy in front of the camera performing my favorite roles. Never ever want to go behind the screen.