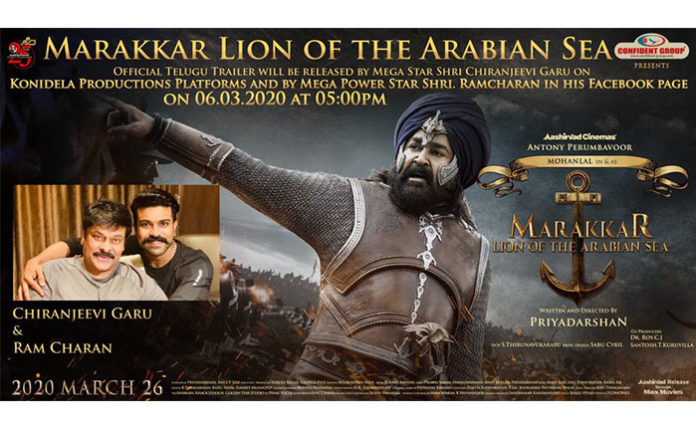 The Complete Actor Mohan Lal never steps back from experimenting with different roles and he surprises everyone from time to time with content-driven films. His second outing in 2020 is the historical period drama Marakkar Arabikadalinte Simham in the direction of Priyadarshan and it’s getting dubbed in Telugu as Marakkari Lion of The Arabian Sea this month. Mohan Lal is playing the role of Kinjali Marakkar 4 and his warrior look in the movie posters have generated buzz around the film.

The Telugu trailer of Marakkari Lion of The Arabian Sea is going to be released on 6th March by Mega Star Chiranjeevi and his son Ram Charan in different platforms. Tomorrow sharp at 5 pm Telugu trailer will be uploaded in Konidela Pro social media accounts by Chiranjeevi then Ram Charan will be sharing the trailer of Mohan Lal period movie in his official Facebook page giving double promotion to The Complete Actor film in Tollywood.