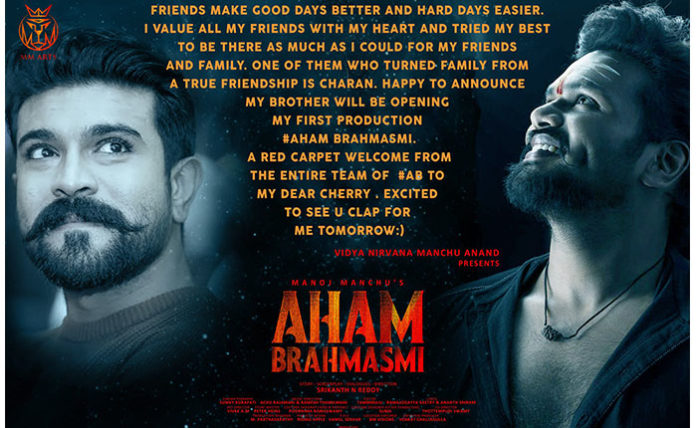 Manchu Manoj has announced his comeback into the glamour world of cinema with a PAN India film “Aham Brahmasmi” and the first look poster released recently has received a positive response from all sections of the audiences. Three moods of Manoj Manchu that are disclosed in Aham Brahmasmi’s first look poster has become the talk of the Tollywood and his agora character is clued in the poster grabbed everyone’s attention.

Aham Brahmasmi is going to start filming from tomorrow and Mega Power Star Ram Charan is going to give the first clap for Manchu Manoj movie. New talent Srikanth N Reddy is directing #AB along with inking the story, screenplay, dialogues for the PAN India movie that will be released in multiple languages. Manoj has shared the news about Ram Charan gracing the opening ceremony of Aham Brahmasmi with an emotional note in a poster and tweeted as